Phil attends a special screening of Miss Misery's A NIGHTMARE TO REMEMBER VOL. 1 Red Carpet Premiere at the Clay Theatre in San Francisco-August 3, 2013 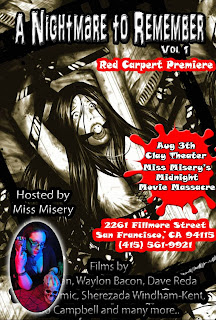 Hello again from San Francisco! Last Saturday night I was at the Clay Theatre over in the Filmore District to check out the special midnight screening of A NIGHTAMRE TO REMEMEBR VOL. 1, the first installment of Miss Misery's series of DVD releases showcasing the very best of indie horror short films! There was a lot of excitement that night as well as special guests, like director Mo Whelan and her good friend and model Julia Lee. Also in attendance were directors Bo Campbell and Gino Oddone as well as John Gillette and Adam Richardson from the Bay Area metal/punk band Dammit! After mingling with the filmmakers in the lobby, we all made our way into theatre for the show. Miss Misery welcomed the audience and soon, the lights dimmed and the horror shorts began!

The A NIGHTMARE TO REMEMBER DVD is hosted by Miss Misery and has her introduce each of the seven short films. The first short up was COMPANION, written and directed by Tonjia Atomic. The film takes place in a fairy-like world of the past and is about a woman who must travel through a haunted forest to save her dying father. There she meets a demon spirit that wants to make a bargain that will affect her and her unborn child's lives forever. A very unique and original film! To learn more about this film and all her other films, visit Tonjia Atomic's website at www.tonjiaatomic.com.

The second short shown was EVERYTHING I WANTED TO KNOW ABOUT ZOMBIES I LEARNED FROM THE MOVIES! The film was directed by Sherezada Kent and it's about a three co-workers that are hiding out in their office basement from an army of zombies. When they figure out a plan, they make a startling revelation about the zombies! And it's hilarious! The short film was made back in 2008 and has appeared at numerous film festivals. You can follow Sherezada Kent on Facebook.

Film short number three was entitled HELP WANTED and was directed by Waylon Bacon. The film's about a college graduate who gets hired at a large warehouse company, where they kill off hookers, homeless people, degenerates, minorites, etc. Almost sounds like working for the government! A lot of social commentary can be found in this short film, which I would love to see more of! To learn more about the director and his films, visit his official website at www.waylonbacon.com.

The fourth film of the night was LADY IN THE KITCHEN. Directed by Bo! Campbell and Gino Oddone, the film stars Victoria Gauthier and is supposedly set in the 1980's (check out that aerobics attire and those big earrings). While cooking up something in the kitchen, she hears a strange sound coming from the kitchen sink. Is the garbage disposal backed up, or is it something else? Something demonic? This very short film (a whopping two minutes!) was quick, fun, and cool, with a nice blood soaked homage to FLASHDANCE at the end!

Fifth film shown was Dave Reda's MY UNDEADLY. In the film a woman is being stalked by an undead zombie, but this awesome horror/comedy has a fun twist ending that made the audience laugh! For those who wish to spice things up in the bedroom, take notes from this film! Reda wrote, produced, directed, and starred in the film along with scream queen Michelle Tomlinson. A cool bonus trivia: the film was shot in the original Michael Myer's house that was used in the original HALLOWEEN! Overall a great short film! To learn more about Reda and his production company Elftwin Films, visit their official website at http://elftwinfilms.com.

The next short screened was Mo Whelan's A SIN THAT CANNOT BE FORGIVEN. This interesting film involves a man alone in his apartment where he killed his girlfriend earlier. The film is very much like an Edgar Allen Poe poem come to life; complete with rhyming dialogue, death, and guilt. Truly outstanding piece of art! I can't wait to see what her next film will be! So make sure you look for more films from this amazingly talented director soon! To learn more about Miss Whelan and her work, visit her production company Probell Films' website at www.probellfilms.com.

The last two short films were both directed by the fantastic Reyna Young. First up was LITTLE MISS MUFFIN; a black and white silent film about Little Miss Muffin eating a muffin, then a big ass spider ripping her throat out! Classic!! Loved it!! The second short UNDER THE BED tells the story of a young girl who makes the mistake of looking under her bed! Naughty, naughty girl!

Overall the screening was freaking awesome!! And I for one cannot wait for Volume 2!! For those of you who wish to learn more about Miss Misery, visit her website at www.missmisery.net. To learn more about her company Last Door Productions, and all her future projects, please visit www.lastdoorwayproductions.com.

Thanks for reading, and enjoy the show!
Posted by Philip Castor at 7:54 PM