Friday night I attended the inaugural CAAMFest San Jose Film Festival! Formerly known as the San Francisco International Asian America Film Festival and usually held in March, this year marks a new name for the festival and a new month. But it's still held at the Camera 3 Cinemas here in Downtown San Jose! Before the screening of the opening film, the Center for Asian American Media (CAAM) executive director Stephan Gong thanked all their sponsors and partners, without whom this festival would not happen. Stephen also talked about having this festival separate from the fest in San Francisco and their goal is to hopefully grow this to a week long festival, which I would love to see! After all the introductions, writer/director Arvin Chen was called up to introduce his film to the audience and thanked us for coming out to see it on this warm, summer night. Then it was time to watch the South Bay Premiere of the film WILL YOU STILL LOVE ME TOMORROW? 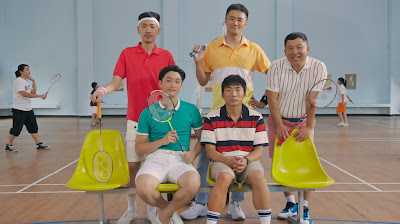 Meet Weichung (Richie Jen). He's an optometrist who was just promoted to manager, is married to the beautiful Feng (Mavis Fan), and they have a son. Life should be good for him, but when he runs into marriage planner Stephen (Lawrence Ko), an old friend from from his gay past, he begins to question his sexual orientation, especially now that his wife wants to have another child. Things begin to get even more complicated when he meets good looking flight attendant (Wong Ko Lok). To make things even more problematic, his younger sister Mandy (Kimi Hsia) has a pre-wedding panic attack and dumps her bland fiance Sen-Sen (Stone) at a department store. Yup, life's not boring for Weichung.

The film was sweet, heart warming, and laugh-out-loud hilarious! Arvin Chen did an incredible job with crafting a story that was fantastic, filled it with believable and relatable characters, and combining surreal and realistic settings and situations that are just beautiful. The film is honest, funny, and is like a breathe of fresh air! I absolutely loved the film! This is what I would call a perfect film! Now I originally wanted to see the film when it was playing during the Frameline 37 Film Festival, but I couldn't make it to the screening. I am very happy that I now got to see this incredible, enchanting, and wonderful film, especially here in San Jose! After the screening, Arvin participated in a fun and informative Q&A session with the audience. 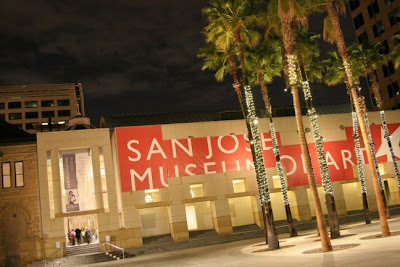 After the screening, we all went to the gala afterparty which was held at the San Jose Museum of Art. There was plenty of food, drinks, and wine to enjoy. Music was played and people were having a very good time! Also the museum had some very cool exhibits to coincide with the festival: Questions from the Sky: New Work by Hung Liu and New Stories from the Edge of Asia: This/That.

What an amazing night, and this was just the beginning! The festival continues for the rest of this weekend so come out to the Camera 3 and partake on the fun! To view the film schedule and to purchase tickets, visit the CAAM website at http://caamedia.org.

Thanks for reading, and enjoy the show!
Posted by Philip Castor at 9:43 AM