Phil attends the opening night of the HITCHCOCK 9 at the Castro Theatre-June 14, 2013 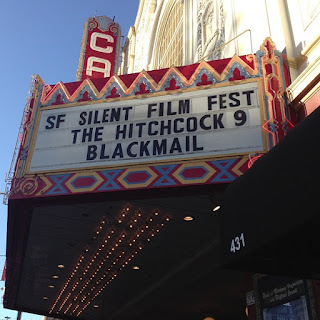 The wait is finally over! After waiting patiently since the announcement back in February during the Silent Winter Event, The San Francisco Silent Film Festival, in conjunction with the British Film Institute (BFI) presented the HITCHCOCK 9 event! Over the course of the weekend, silent film fans were treated to all nine surviving silent films that the Master of Suspense Alfred Hitchcock made (FEAR O' GOD aka THE MOUNTAIN EAGLE is considered to be lost)! And all my friends were there on opening night! There was my partner-in-crime Jason Wiener, the mastermind behind the film blog Jason Watches Movies. And I also finally got to see my friend Lara Gabrielle, who's amazing film bog Backlots is one of my favorites to read and follow. The air was filled excitement as silent film fans poured into the Castro Theatre, my home for the next two and a half days! Yup, this is how all weekends should be spent!!

Before the screening, the festival's artistic director Anita Monga greeted the audience and gave us some interesting info about tonight's film. First off this Hitchcock's last silent film and was actually shot twice: a silent version for those theaters that didn't have sound capability and a "talkie" which has been the more popular and the most seen version. Plus, this film has the longest cameo appearance by the Master of Suspense himself: a whole 20 seconds, to which he is a passenger that's being pestered by a kid on a train. It's a classic cameo! After Anita's lovely intro, the lights dimmed and we were suddenly transported back in time! 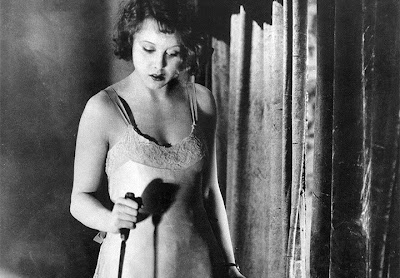 The film BLACKMAIL (1929) is about the daughter of a London shopkeeper named Alice White (Anny Ondra), whose Scotland Yard detective boyfriend Frank Webber (John Longden) seems to be more interested in police work than in her. This causes Alice to secretly arranged to meet another man named Mr. Crewe (Cyril Ritchard) for a drink. She then agrees to go to see his studio, where he tries to rape her. Alice defends herself and kills the him with a bread knife. Her boyfriend is assigned to investigate and soon determines that his girlfriend is the killer, but so has someone else and threatens to blackmail them both.

It's really interesting to see Alfred Hitchcock's roots in the world of cinema! During the silent film era, he was more experimental with his set ups, panning the camera, extreme close-ups, and fades. One can obviously see the genius of Mr. Hitchcock, and with this film, you can tell he was going to make cinematic history!

Now to bring this film to life was the incredible Mont Alto Orchestra, whose music was just outstanding!! They were on fire at the screening!! Their music was the perfect fit for this Hitchcock classic!!

What a night!! Remember tickets for this event are still on sale now so buy them before they sells out! To purchase tickets, and to learn more about the SF Silent Film Festival, and how to become a member, visit their website at http://silentfilm.org.

Thanks for reading, and enjoy the show!
Posted by Philip Castor at 9:44 PM