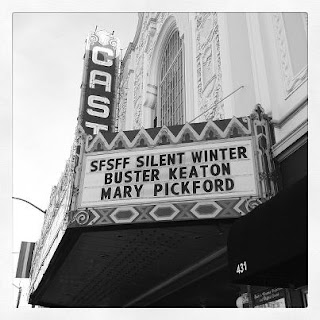 Hello again my faithful readers! This past Saturday I attended the San Francisco Silent Film Festival's Silent Winter Event at the historic Castro Theatre! This one-day event was once again attended by silent film fans from all over the world! Upon arriving at the theatre I saw several of my fellow film bloggers. First person I saw was the lovely Ms. Marya E. Gates from Cinema Fanatic. Then I saw Lara Gabrielle, who's amazing film bog Backlots is one of my favorite blogs to read and follow. And finally I ran into my partner-in-crime Jason Wiener, the mastermind behind the film blog Jason Watches Movies. After saying hello to some of my other friends, I made my way to the front of the theatre to take in a day's worth of silent movie magic.

The first film screened was SNOW WHITE (1916). Starring Marguerite Clark as Snow White, the film is based more on the stage production rather than the Grimm Brothers story. In fact, Clack starred as Snow White on the theater stage. It is well known that a 15-year-old Walt Disney was inspired by this silent film and is in many ways similar to the classic 1937 Disney version than one might think. Walt re-used several of the film's scenes for his film, such as Snow White looking through the window of the dwarf's home and seeing Grumpy being washed in a barrel. While the names of the dwarfs are different and the queen and the witch are two different characters, the film on the whole was fun and entertaining to watch. The film was produced by the Famous Players Film Company and distributed by Paramount Pictures on December 25, 1916. The musical accompaniment was provided by Donald Sosin on the grand piano.


The second program of the day was THINK SLOW, ACT FAST: BUSTER KEATON SHORTS. Keaton was on of the "Big Three" comics of the silent film era (the other two were Charlie Chaplin and Harold Lloyd) and these three shorts demonstrate his comedic genius perfectly. The first short screened was ONE WEEK (1920): Buster and Sybil Seely play newlyweds that attempts to build a do-it-yourself house kit. However her jealous ex sabotages the kit's component numbering, thus the house is less than perfect when completed! THE SCARECROW (1920) pits Keaton and his roommate Joe Roberts against one another for the heart of the farmer's daughter (Sybil Seely once again). The opening gags of Keaton and Roberts in their one room cottage is hilarious! THE PLAYHOUSE (1921) has one of the most amazing opening sequences in silent film history! Keaton plays everyone in a theatre simultaneously (through multiple exposures). He's the band leader, all its members, the dancers on the stage and everyone in the audience! Keaton achieved this trick solely in the camera, long before there was CGI or the use of green screen! It truly is a sight to behold! On the grand piano for these program was once again Donald Sosin.

The third film screened was the astounding THE THIEF OF BAGDAD (1924) starring the great Douglas Fairbanks. The isn't anything I can say about the film that hasn't already been said since its release. Boasting large, extravagant sets over six acres of land and a cast of thousands, this is one of the greatest and finest silent films ever made. Fairbanks literally leaps of the screen! Hard to believe that the man was 40 years old when he made the film! Also making an appearance in the film is Anna May Wong. Fairbanks produced the film himself and was released by United Artists (which he formed along with Mary Pickford, Charlie Chaplin, and D.W. Griffith) on March 23, 1924. The musical accompaniment was provided by the great Mont Alto Motion Picture Orchestra.

Film number four for the day was MY BEST GIRL (1927) starring America's Sweetheart Mary Pickford in her last silent film ever! In the film Mary portrays stockroom girl Maggie Johnson, who falls in love with fellow employee Joe Grant (Charles 'Buddy' Rogers). However Joe is actually Joe Merrill, son of the millionaire owner of a chain of 5 and 10 cent stores. It was during the making of the film that both Mary and Buddy fell in love and you can see it on the screen. A charming, sweet, and funny romantic comedy, the film was produced by Pickford herself and distributed by United Artists on October 31, 1927. Musical accompaniment was provided by Donald Sosin on the grand piano.

The fifth and final film of the day was the German Expressionistic film FAUST (1926). The film follows a German alchemist by the name of Faust. As God and Satan war over Earth, the Devil preaches that he will be able to tempt Faust into darkness and so has a wager with God to settle things. Satan sends Mephisto to Earth to offer Faust an end to the plague that is making it's way through the local population, and eternal youth, in return for Faust's soul. From the same director who made such legendary and acclaimed films NOSFERATU, THE PHANTOM, and THE LAST LAUGH, the film was Murnau's last film he made in Germany before fleeing to the United States. Here we see the ultimate battle between good and evil, and containing some of the most amazing visuals and art direction to appear in a silent film, Murnau raised the bar very high for other films to follow. The film was released by Universum Film AG (better known simply as UFA) in Germany on September 14, 1926. It was released here in America on December 6, 1927. Providing the musical score was Christian Elliot on the Mighty Wurlitzer.

And folks there you have it! What a fun-filled day of silent movie watching! Now if missed out this event, pay close attention. During the event, the SF Silent Film Festival announced that they will be having a special presentation called THE HITCHCOCK 9, featuring all nine silent films that the Master of Suspence Alfred Hitchcock's made! This special event will take place at the Castro Theatre on June 14th-16th! Tickets for this event is on sale now so buy them before it sells out! To purchase tickets, and to learn more about the SF Silent Film Festival, and how to become a member, visit their website at http://silentfilm.org.

Thanks for reading, and enjoy the show!
Posted by Philip Castor at 10:26 PM