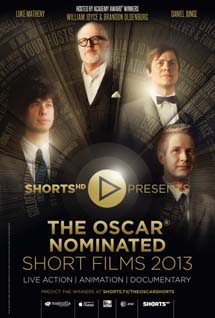 With the Oscars right around the corner, I finally got around to see THE OSCAR NOMINATED ANIMATED SHORT FILMS program at the Camera 3 here in Downtown San Jose. The great thing about the Camers 3 is that right in the lobby there's Psycho Donuts, the home to some very tasty and original donuts. After picking up some, I made my way inside the theatre to see this year's nominees.

The program was hosted by William Joyce and Brandon Oldenburg, who were OSCAR winners in 2012 with their animated short film THE FANTASTIC FLYING BOOKS OF MR. MORRIS LESSMORE. In between shorts, the duo talked about their short, winning the OSCAR, and the film projects they have worked on since. And the nominees are:

The Longest Daycare (dir. David Silverman, USA/English, 5 minutes) -- Maggie Simpson spends a day at the Ayn Rand Daycare Center where she is diagnosed at an average intelligence level. Longing to be grouped with the gifted children, Maggie finds her destiny by rescuing a lonely cocoon from Baby Gerald, who is busy smooshing butterflies.

Adam & Dog (dir. Minkyu Lee, USA/non-dialogue, 16 minutes) -- The story about the dog of Eden. What happened in those first days of Creation that made Man and Dog so inseparable? The dog, as he lives through this curious world, encounters a strange creature; a human being named Adam - and with that discovers a new found connection to the world.

Head Over Heels (dirs. Timothy Reckart and Fodhla Cronin O'Reilly, UK/English, 11 minutes) --After many years of marriage, Walter and Madge have grown apart: he lives on the floor and she lives on the ceiling. When Walter discovers a long-lost memento of their wedding day, he tries to reignite their old romance. But it brings their equilibrium crashing down, and the couple that can't agree which way is up must find a way to put their marriage back together.

Paperman (dir. John Kahrs, USA/English, 7 minutes) -- Paperman follows the story of a lonely young man in mid-century New York City, whose destiny takes an unexpected turn after a chance meeting with a beautiful woman on his morning commute. Convinced the girl of his dreams is gone forever, he gets a second chance when he spots her in a skyscraper window across the avenue from his office. With only his heart, imagination and a stack of papers to get her attention, his efforts are no match for what the fates have in store for him. This short film was originally screened before WRECK-IT RALPH during its theatrical release.

In the program, they also showed three Highly Commended shorts:

Abiogenesis (dir. Richard Mans, New Zealand/non-dialogue, 5 minutes) -- In this breathtaking science fiction spectacle, a strange mechanical device lands on a desolate world and uses the planet to undergo a startling transformation, that has profound implications for an entire galaxy.

Dripped (dir. Léo Verrier, France/French, 9 minutes) -- Jack is a strange character. He steals paintings from museums to eat them. He feeds himself with the artistic process of the painter. But one day, the museums are closed and he will have to paint by himself to survive.


This year's competition looks to be fierce. All these animated short films were outstanding! It really is a toss up in my opinion! So if you want to see who wins, make sure you check out the OSCARS this Sunday! Check your local cable provider to see which station the OSCARS is on! Until then, you cane still check out THE OSCAR NOMINATED ANIMATED SHORT FILMS program at the Camera 3, but it ends this Thursday, February 21st! To view their showtimes, visit their website at www.cameracinemas.com.

Thanks for reading, and enjoy the show!
Posted by Philip Castor at 10:18 PM