When you hear the name Dave Grohl, you stop and think of all the things that this man has done. He was the drummer for Nirvana, of the most important rock bands of all time. When lead singer Kurt Cobain committed suicide and Nirvana disbanded, he went on to form the Foo Fighters, started his own record label Roswell Records, won multiple Grammy Awards, played with numerous rock stars, and has become one of the most popular rock stars of all time. Now he has added another credit to his already impressive resume: filmmaker. His directorial debut film SOUND CITY, a documentary about the legendary Los Angeles recording studio. 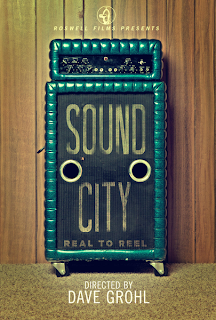 The film traces the existence of the building called Sound City Studios, which was located in the San Fernando Valley, and the heart of the studio: the Neve 8028 analog mixing console. The list of artists and musicians who have recorded there reads like a who's who in rock 'n' roll: Neil Young, Fleetwood Mac, War, REO Speedwagon, Cheap Trick, Foreigner, Tom Petty, Pat Benatar, Rick Springfield, Santana, Fear, Ronnie James Dio, Ratt, Nirvana, Rage Against The Machine, The Black Crowes, The Red Hot Chili Peppers, Carl Perkins, Johnny Cash, Queens of the Stone Age, Slipknot, Bad Religion, Nine Inch Nails, Kid Rock, and Metallica. Through interviews with a majority of these artists as well as producers like Rick Ruben and Butch Vig, the film focuses on the amazing history of the studio, on all the albums recorded there, the human element of music in an age of technology, and feature performances from many of the artists that called it "home."

The idea for the film came about when Dave Grohl purchased the Neve 8028 analog mixing console when the studio closed in 2011. Grohls' personal interest started in 1991 when Nirvana came to Sound City Studios when it was in dire straits. After the release of Nevermind, the studio became popular again. However with the release of Pro Tools and home recording becoming more digital, the studio became obsolete. Grohl stated in the documentary that that mixing board was the reason he's where he's at and wanted to re-create that human factor that's been missing in music. He then called many artists to collaborate on a new album and using the old Neve mixing board. In the film we see Stevie Nicks, Trent Reznor from Nine Inch Nails, Rick Springfield, Lee Ving from Fear, and in the last 20 minutes of the film, we see one of the most amazing collaborations of all time: Sir Paul McCartney from The Beatles making music with the surviving members of Nirvana!!


Grohl's debut film is a love letter to one of the most important studios of all time. Aiding him on the film was editor Paul Crowder (DOGTOWN AND Z BOYS, RIDING GIANTS) and writer Mark Monroe (THE TILLMAN STORY, THE COVE). The end result is just fantastic! Distributing the film is Roswell Films, a division of the Roswell Records label that releases all of the Foo Fighters album.

Growing up in the late 1970's and all of the 1980's, I use to listen to the radio and all this amazing music that I loved to listen to, a majority of them were recorded at this one studio. It really boggles the mind as to how many classic and influential albums were made at Sound City Studios. I really don't know why Los Angeles didn't make it a registered landmark because of its importance to the music industry. It should be a museum right now. It should still be here. At least we have not only the music, but now we have this film.

SOUND CITY is one of my favorite documentaries so far this year! It's a history lesson of how and why music need to retain its human element and how one studio, and one mixing board, changed the landscape of the music industry. 5 out of 5 stars!! Highly recommended!!


SOUND CITY is currently playing in select theaters nationwide. To see where it's playing, visit the film's official website at http://buy.soundcitymovie.com. Also make sure you all like the film's Facebook page and follow the film on Twitter! The film is also available on Video On Demand, so check your local cable provider to order it.

Thanks for reading, and enjoy the show!
Posted by Philip Castor at 11:36 AM