Phil attends a special screening of WELCOME TO THE DOLLHOUSE hosted by Peaches Christ with special guest Heather Matarazzo live in-person at the Castro Theatre-February 8, 2013 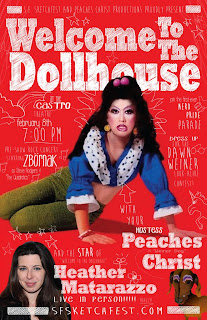 Greetings and salutations from San Francisco! This past Friday night I had the honor to cover the first Peaches Christ show of 2013! Taking place during the SF SketchFest, the film for the evening was director Todd Solondz's 1995 indie cult hit WELCOME TO THE DOLLHOUSE. Making this event even more special, Peaches had actress Heather Matarazzo in the house! Another factor that made this show even more special was that my very good friend/make-up artist extraordinaire Michelle Snyder joined me for the screening! Not only this was her first Peaches Christ show, but her visit to the Castro Theatre! After having dinner at my favorite spot Orphan Andy's, we made our way inside to take in the show!

Finding seats in the middle of the second row, Michelle and I were treated to a spectacular opening show! The house rock band Zbörnak performed for the audience while Peaches herself stuck a pose on stage, imitating Heather's pose on the poster. Soon she was swaying back and forth to the music, and then her cast came out to perform scenes from the film. Once again it was fantastic, filled with rambunctious humor and good fun!

After the performance, Peaches welcomed the sold out crowd and then brought up Heather Matarazzo! The audience went absolutely crazy! They were standing on their feet, cheering and screaming at the top of their lungs! Heather and Peaches cozied up on stage and had a great interview. Heather recalled what was it like working with Todd Solondz, the film's impact on her life and career, her coming out, plus her future projects she's currently working on!

After the interview it was time for the big costume contest! Peaches appointed Heather as the judge for the contest and this was no easy tack by any means. There were some great costumes, but the lucky winner was couple Amie and Aaron, who dressed up as Dawn Wiener and Brandon McCarthy respectively. After that, it was time for the movie!

In the film Heather portrays Dawn, a painfully awkward 13 year old girl who not only has to contend with being ostracized and friendless at school (they taunt her and call her names like ;Dog-Face' or 'Wiener-Dog' or 'Lesbo'), but is essentially ignored and treated with disdain at home as well. Being the middle child is obviously not the easiest thing to deal with within the family dynamic, but when your older brother (Matthew Faber) is the "King of the Nerds" and your little sister (Daria Kalinina) is a gorgeous ballet-dancing cherub who commands total devotion from her mother, life is generally difficult for Dawn. And that's just the beginning--her life seems to be falling apart when she faces rejection from the older guy in her brother's band that she has a crush on, her parents want to tear down her 'Special People's Club' clubhouse, her sister is abducted, and the school's resident troublemaker wants to rape her! Yup, poor 'ol Dawn has it rough!

Todd Solondz crafted an anti-coming of age story. Where as Hollywood has its own version of this classic tale, Solondz's take on it is more realistic: from the bullying to the middle child syndrome, the neglectful parents and the isolatation are just some of the issues that he has placed in Dawn's life. Believe it or not, this was Heather's first movie role ever! Not only that, she never had any acting lessons and was only 13 years old when she made the film! Her performance in the film is just staggering! You cannot take your eyes off her, therefore we are forced to journey along with her Dawn as she attempts to survive junior high! The film was distributed by Sony Pictures Classics and released to theaters on May 24, 1996. 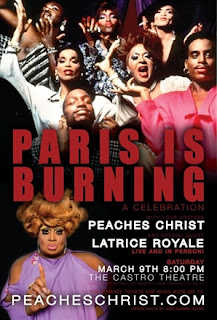 Both Michelle and I had a blast at the show! Once again Peaches outdid herself with this event! And there's plenty more fun ahead! Peaches will be back at the Castro Theatre on March 9th at 8pm for the screening of the documentary PARIS IS BURNING! The film is one of the greatest documentaries in queer cinema history! This is one show that you do not want to miss! Also if you are interested in becoming a fan of Peaches Christ, or want to purchase ticket for her next show, visit her website at www.peacheschrist.com. And don't forget to follow her on Facebook and Twitter! And for all you Heather Matarazzo fans out there, don't forget to follower her on Facebook and Twitter as well!

To view the Castro Theater's film schedule, visit their website at www.castrotheatre.com

Thanks for reading, and enjoy the show!
Posted by Philip Castor at 3:58 PM