Recently I was asked my a friend of mine that, besides horror and exploitation films, what are some of my other favorite film genres. I quickly responded without hesitation documentaries. These films must deal with the truth and can have the power to change things; open the eyes to those who may not know what is happening in the world around them. They teach us the past, what's happening in the present, and how we can reshape our future. They also shed light on the hypocrisy of the world and the injustice that still to this day plague our society. Case in point, the new documentary film WEST OF MEMPHIS shows us how a horrible crime lead to the incarciration three innocent young men. 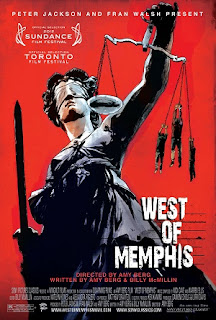 In 1993, the bodies of Christopher Byers, Steven Branch, and Michael Moore were found viciously beaten and murdered in the small town of West Memphis, Arkansas. Less than a year later, Damien Echols, Jessie Misskelley, Jr. and Jason Baldwin were convicted of the crime, even though the prosecution's evidence was feeble and speculative at best. Almost 18 years later, the three wrongfully convicted men still claim their innocence and fight to overturn the injustices that have destroyed the larger part of their lives.

In 1993, while attending college, I had heard of the murders and the subsequent witch hunt and trial. For the past almost two decades, the West Memphis Three has been a part of my life as well as with most people in my generation. A lot of people who didn't know what had happened soon learned about them courtesy of filmmakers Joe Berlinger and Bruce Sinofsky. In 1996, their documentary PARADISE LOST: THE CHILD MURDERS AT ROBIN HOOD HILLS made the public aware of the West Memphis 3 and brought media attention to them, shedding light on the injustice that was handed down. Two more documentaries followed: PARADISE LOST 2: REVELATIONS and PARADISE LOST 3: PURGATORY. Soon artists and filmmakers were lending support for their freedom.

WEST OF MEMPHIS was directed by Amy J. Berg, known best for her Academy Award-nominated documentary 2006 film DELIVER US FROM EVIL about the sex abuse cases in Roman Catholic Church and an abusive native Irish priest Oliver O'Grady. It was produced by Damien Echols (one of the West Memphis Three) and filmmaker Peter Jackson (LORD OF THE RINGS TRILOGY, THE HOBBIT) Amy acknowledges the PARADISE LOST films almost immediately and mentions them throughout the film, but most of the film is her own voice: allowing the film to show the investigation, research and appeals process in a way that has never been seen before; revealing shocking and disturbing new information about a case that still haunts the American South.

Those who were part of the trial were interviewed as well as celebrities such as Eddie Vedder from Pearl Jam, Natalie Maines from the Dixie Chicks, and Peter Jackson himself. But an interesting individual to watch for in the film is Terry Hobbs, stepfather of Steve Branch. I don't want to include any spoilers in this review, but after viewing the film, one has to wonder....

Overall WEST OF MEMPHIS is a powerful, riveting, and unflinching examination of our justice system. It brings to light the travesty that transpired 18 years ago when three innocent teenagers were found guilty of a crime they didn't commit. This is why I love watching documentaries and this is one that you all need to see! 5 out of 5 stars! Highly recommended!!


WEST OF MEMPHIS is currently playing in select theaters nationwide, including at the Camera 3 here in the Bay Area. To view showtimes, visit their website at www.cameracinemas.com.

Thanks for reading, and enjoy the show!
Posted by Philip Castor at 7:01 PM