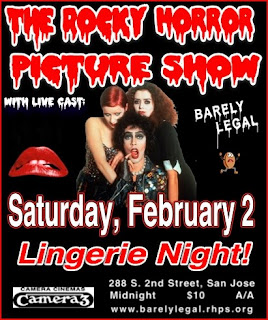 This past Saturday night my good friend Leslie and I did the Time Warp again over at the midnight screening of THE ROCKY HORROR PICTURE SHOW at the Camera 3 in Downtown San Jose! The film was presented by the Camera Cinemas, the Barley Legal production crew, and Psycho Donuts, home of the maniacal named snacks! Now what made this screening even more exciting was that this was Lingerie Night because of Valentine's Day being this month! Yup, 'twas going to be a very fun night!

The Camera 3's lobby was packed full of people, mostly young teenagers and college students, and some of them have never been to a midnight ROCKY screening before! Mmmmm.......I smell virgins! My only real complaint was that their wasn't enough ladies in lingerie! Well, besides the cast and Leslie! Tee-hee!!

After the theater was filled, the show began! As always, our host Nate McHavoc was our emcee (and Riff Raff) for this special Lingerie Night show. He had all the virgins come up and do the butt dance (there were A LOT of virgins), and then sent everyone under 18 years old back to their seats. After picking out six victims....uh.....virgins....Nate subjected them to his embarrassing games and we all had a big laugh at their expense! It was awesome!

There isn't anything that I can say that hasn't already been said. The film is talked about in books and periodicals, referenced in movies and TV shows, and I dare you to find anyone who doesn't know how to do the Time Warp dance. THE ROCKY HORROR PICTURE has become part of the American Lexicon of cult films, a film that to this day, is the longest running theatrical released film in Hollywood history. THE ROCKY HORROR PICTURE SHOW is the alpha and omega of midnight movie; a cult classic that has no real equal. The film is in a class all by itself, far ahead of its time. The film was a bomb when it was first released. Now, it is part of the Library of Congress' National Film Registry. The film's message of "Don't dream it. Be it." has had a major influence on those who are different, the outcasts if you will. It resonates and has inspired many who felt that they didn't belong. Artists, punks, gays, lesbians, movie maniacs, college students, and everyone in between. It speaks to us all to not give up on hope and to not give up on ourselves and to keep following our passions in life! Also the film is just one of the best films ever made! After 36 years, the film continues to play in theaters, and it is playing every month at the Camera 3! 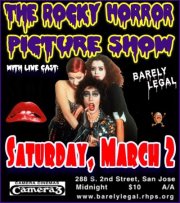 So another great midnight screening has come and gone. But don't fret, the Barely Legal crew will be back in San Jose next month. They put on shows all over Northern California, so no matter where you live, there will be a show near you. So what are you waiting for? Come out next Saturday and join in on all this ROCKY HORROR fun! You'll be glad you did! To learn more about future shows, and how you can become a cast member, visit their website at barelylegal.rhps.org.

Thanks for reading, and enjoy the show!
Posted by Philip Castor at 6:26 PM