Hello again everybody and welcome back to Day Two of my trip to Frameline37: San Francisco International LGBT Film Festival!! On Saturday I saw three films, including a midnight show featuring the one and only Peaches Christ!! Keeping me company on my trip was my best friend and make-up artist Michelle Snyder. So let's get this party started!! 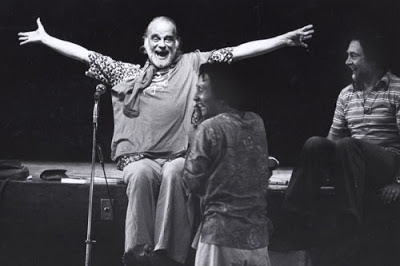 The first film we saw was a documentary called BIG JOY: THE ADVENTURES OF JAMES BROUGHTON. Poet, author, filmmaker, trickster, artist, James Broughton was all these things and more.  He was part of the San Francisco Renaissance. He was an early pioneer of the experimental film movement in America. He was also the inspiration of the beat movement. He was part of the Radical Faeries as well as a member of The Sisters of Perpetual Indulgence named Sister Sermonetta. He had love affairs with both men and women, and briefly lived with the film critic Pauline Kael and they had a daughter named Gina. But it wasn't until Broughton met student Joel Singer, that he had finally fallen in love. And Joel became his muse, and created several new short films as well as new poetry books. James and Joel remained together for the next 25 years until his death on May 17, 1999.

The film was simply wonderful as well as inspiring! Here is an artist who made art his life, his passion, and his career. While he was making his incredible body of work, he was hiding in the closet, which affected his art because he was acting straight. But he followed his dream and became an acclaimed and award winning filmmaker and author. To the artist inside of me, I wished I could've been more like him! Truly an inspiration! After the screening, the producers as well as people interviewed in the film came onstage to conduct and funny and touching Q&A. Just a fantastic documentary! 5 out of 5 stars!! Highly recommended!! 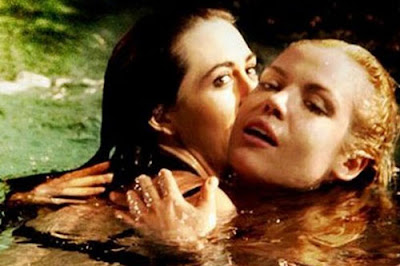 The second film Michelle and I saw was the new film by the award winning lesbian director Jamie Babbit. BREAKING THE GIRLS is one outstanding thriller that features some great thrills and jaw dropping twists and turns! Sara Ryan (Agnes Bruckner) is young law student who works as a bartender. One night her friend and fellow classmate Eric (Shawn Ashmore) walks into the bar and somewhat flirts with her. This does not sit well with Brooke (Shanna Collins), who's dating Eric. Broke begins to sabotage Sara's life and until she has nothing left (she loses her housing, her scholarship, and her job). Enter Alex (Madeline Zima) a striking, mysterious, wild, beautiful and spoiled rich bitch lesbian who comes to Sara's rescue. The two women instantly bond and soon a love affair begins to bloom. But then things become complicated as lies, deceit and murder begin to consume Sara's life, thanks to Alex. To save her life, she reaches out to Eric and to Alex's gold-digging stepmother Nina (Kate Levering) for help, but will it be too late?

The film is easily her greatest production to date. Sporting a top notch and professional cast, high production value, and one outstanding script (courtesy of iconic lesbian actress/screenwriter Guinevere Turner), Babbit breaks the mold of what a lesbian film could and should be! And by working in a totally different genre, she gets to stretch out her wings as a director and really venture into a whole new world with new toys to play with. Interesting set-ups and lighting, long takes, and intricate characters are what we find in the film. Plus not too mention, hot steamy lesbian action that well make you sweat! An amazing piece of cinema from beginning to end! Destined to become a true classic!! 5 out of 5 stars!! Highly recommended!!

Before the screening, the festival presented Babbit with the Frameline Award for her contributions to queer cinema and even showed a reel with clips from her work in film and television. After the screening, she and Turner took the stage for a fun and interesting Q&A session!

After the screening Michelle and I went and had a few drinks over at the bar Twin Peaks on the corner of Castro and Market. Then we dashed across the street for some very yummy pizza! Then it was back to the Castro Theatre for the special midnight show!! 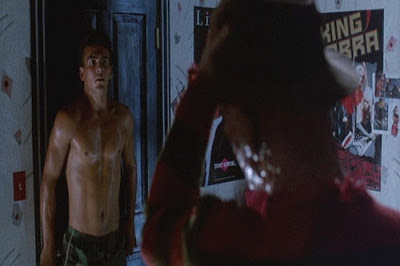 For this year's Frameline, the festival teamed up with the iconic Peaches Christ for a Midnight Mass extravaganza! Peaches screened one of the greatest queer horror films of all time: A NIGHTMARE ON ELM STREET PART 2: FREDDY' REVENGE!! And she had a very special guest for the show: the film's scream queen star himself Mark Patton was there live and in-person!! Michelle and I made our way to the front row so we could see all the action!

The show began with a horrifying and scary (in a good way of course) opening act with our hostess dressed up as Peaches Krueger doing was she does best; torturing a young nubile teenage boy in his sleep while leading a dance number with hot and sexy gay guys dressed up in leather! Peaches' make-up was just incredible! I think even Robert England himself would be impressed!

After the song and dance, Peaches thanked the audience and welcomed the return of the Midnight Mass!! She then wasted no time in bringing up Mark Patton for a very interesting and quite informative interview. Mark recalled the making of the film, the long hours, him knowing how queer the film was and so forth. He also talked about coming out and living in South America. Peaches had another surprise up her sleeve, as she called up the film's cinematographer Jacques Haitkin to the stage! After the interview, both Mark and Jacques took questions from the audience. There was also a costume contest, and then it was movie time!!

In the film, Mark portrays Jesse, the new kid in town who's family has just moved into Nancy Thomson's old house on Elm Street. However it doesn't very long till he's having the same horrific nightmares that plagued poor Nancy had about Freddy. Jesse befriends his neighbor and classmate Lisa, whom he tells about his horrible nightmares but she doesn't believe him. That is until she starts having the same nightmares herself. After doing some research on Freddy, she finds out that he's planning to take it over Jesse's body, but she may be too late. When he does takes over Jesse's body, all Hell breaks loose.

In hindsight, it's a wonder that no one in the film, cast or crew, noticed or questioned some of the material in the film. After watching it years later as an adult, I was flabbergasted on just how gay it was! The gay innuendos, the coach being tied in the shower and being whipped by towels, the leather bar scene, the list goes on and on. Go back and watch it again. It looks a lot different as an adult than it did when you were a kid! The film has gone on to become one of the greatest homoerotic horror films of all time!! And Mark has been hailed as a scream queen icon!

And that was my second day at Frameline37!! Remeber the festival continues until June 30th so there's still time to check out all these amazing films! To purchase tickets, passes, and to view the screenings schedule, visit their official website at www.frameline.org.

Thanks for reading, and enjoy the show!
Posted by Philip Castor at 1:38 PM