When the Camera 7 Cinemas closed in the Pruneyard Campbell back in 2017, a piece of me died. This was my home away from home. Even before I started this blog, I practically lived there. I fully supported the Camera Cinemas for years. When it was announced that the theater was going to be closed for a complete remodel, I was hesitant. I knew that when it would reopen, it wasn't going to be the Camera 7 I knew and loved. When it did finally reopened as the Pruneyard Cinemas Dine-In, it felt like a slap in the face. The Camera Cinemas were now extinct, and all I have are the memories. But I was very curious about what it looked like. So, I finally broke down and went to see a movie there. Of course, the first movie I see there would be a horror film. Did you expect anything less of me? After work on Thursday, I went and saw THE NUN, the latest installment of THE CONJURING universe. 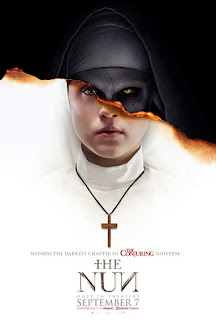 The film's official synopsis: When a young nun at a cloistered abbey in Romania takes her own life, a priest with a haunted past and a novitiate on the threshold of her final vows are sent by the Vatican to investigate. Together they uncover the order's unholy secret. Risking not only their lives but their faith and their very souls, they confront a malevolent force in the form of the same demonic nun that first terrorized audiences in THE CONJURING 2, as the abbey becomes a horrific battleground between the living and the damned.

The setting of the abbey gave the movie an eerie feel of atmosphere and dread. This was the perfect location to tell the story. It felt like a meld of a Hammer Horror film and a Lucio Fulci Italian movie. This was a my favorite part of this fright flick. The other was the acting.

Our heroine Sister Irene (Taissa Farmiga) brought that innocence and naiveté that helps our character to grow and become a stronger, powerful instrument of God. Farmiga was the perfect casting choice for bringing character development and depth. And in case you were wondering, yes, she is the younger sister of Academy Award nominee Vera Farmiga. Her on-screen chemistry with lead actor Demián Bichir as Father Burke were great, but it's the final showdown with the nun herself, Bonnie Aaron, that proves that she's got the acting chops to be a lead actress. Also, Bichir is one of the scariest freaking nun I've ever seen in a movie before!

Director Corin Hardy got his start making a series of video shorts before making his feature film debut with the 2015 indie horror flick THE HALLOW, which garnered decent reviews. Here, he looks like he takes command of the movie; combining chills, supernatural scares, and atmospheric dread. The only real complaint is the script, which falls into the laps of screenwriters Gary Dauberman and James Wan. I felt like the script needed to be more tightened up, better character arcs, not have the nun appear almost throughout the film, her backstory could've been more imaginative, and better dialogue because, in some scenes, they were a little cringe worthy. Seriously.

As I sit and write this review, the film has already garnered $228.7 million worldwide! And the film's budget was only $22 million! Quite an impressive feat since it only came out on September 7th. This proves that there is an audience for these types of movies. The horror genre has a proven track record; that they can make a studio a lot of money on shoe-string budgets. We as fans want to see horror films, but make sure that there good horror films! And with the success of this movie, it proves that fans are still interested in THE CONJURING universe, so let's keep the fans happy here folks.

THE NUN is a supernatural fright film that will satisfy fans of the THE CONJURING universe! While not a perfect film, it was an entertaining, atmospheric, thrilling ghost story with some truly creepy scares that will chill you to the bone! 3 1/2 out of 5 stars! It's worth a look!


THE NUN is playing in theaters nationwide, including at the Pruneyard Cinemas Dine-In here in the Bay Area. To view showtimes, visit their website at www.pruneyardcinemas.com.

Thanks for reading, and enjoy the horror!
Posted by Philip Castor at 9:29 PM