In 1987, the film PREDATOR, starring former California governor Arnold Schwarzenegger, Carl Weathers, Bill Duke, former Minnesota governor Jesse Ventura, and Shane Black, the film hit theaters and became a huge blockbuster. Combining action, science fiction, and horror, it has become a classic among fans. Then came PREDATOR 2 in 1991. It was OK, but not great. Then came ALIEN VS. PREDATOR and ALIEN VS. PREDATOR: REQUIEM in 2004 and 2007 respectively. They both sucked ass. And then came filmmaker Robert Rodriguez's 2010 sequel PREDATORS. It was OK too. It seemed like fans of the franchise were never going to get a film that would be on par with the original. Enter actor Shane Black, who starred in the first film, who teamed up with co-screenwriter Fred Dekker to give us THE PREDATOR, which I saw over at the Cinelux Almaden Cafe & Lounge. 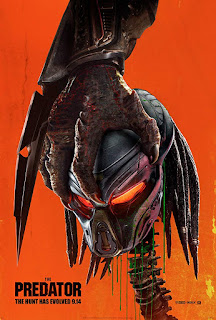 The film's official synopsis: From the outer reaches of space to the small-town streets of suburbia, the hunt comes home. Now, the universe's most lethal hunters are stronger, smarter and deadlier than ever before, having genetically upgraded themselves with DNA from other species. When a young boy accidentally triggers their return to Earth, only a ragtag crew of ex-soldiers and a disgruntled science teacher can prevent the end of the human race.

OK, first things first. DO NOT COMPARE IT TO THE ORIGINAL! Nothing will be better than the first PREDATOR!! NOTHING!! So don't go into the film think it's gonna be a masterpiece of fine cinema, because it is so not. But, if you like your movies filled with blood, violence, raunchy and vulgar language, big explosions, and Olivia Munn running around looking all sexy, then this is right up your alley.

Black keeps the action, humor, and violence fast as lightening with very little emphasis on character development. As I said earlier, he co-wrote the screenplay with the legendary Fred Dekker, the man responsible for two of the greatest 80's films of all time: THE MONSTER SQUAD and NIGHT OF THE CREEPS! Legend has it that both Dekker and Black have been friends for decades and Black recruited his long time friend to help craft the script, filled with generic one-liners, clichés, over-the-top bloodshed, and for some stupid reason, it fucking works.

The cast itself does a nice job of trying to give their respective characters some depth and personality, but the real reason we want to see the movie is the Predators! And in this film, we get not one but two of them! Both look awesome, especially the Mutant Predator! But also, Olivia Munn looks so damn sexy playing nerd doctor Casey Bracket, who also knows how to shoot shotguns and assault rifles. Hey, wait just a second! How the hell does she know how to use a gun? I don't remember the movie explaining this! Oh, forget about it! Just watch Olivia Munn look all sexy and nerdy while she shoots at the Mutant Predator.

So far, the movie hasn't been performing well at the box office. As I am writing this, the movie has only earned $56.6 million worldwide. This isn't good news, since the film's budget was about $208 million, which included advertisements. The film's producer, John Davis, says this movie would set up two more sequels that he hopes Shane Black will direct. Let's see if this comes to fruition.

THE PREDATOR is an entertaining, action packed sci-fi flick that hardcore fans of the franchise will enjoy! But in the end, it's just another typical Hollywood popcorn movie! I was just expecting something more to it is all! 3 out of stars! It's worth a look!


THE PREDATOR is playing in theaters nationwide, including at the Cinelux Theaters here in the Bay Area. To view showtimes, visit their website at www.cineluxtheatres.com.

Thanks for reading, and enjoy the show!
Posted by Philip Castor at 2:11 PM