Phil attends MIDNITES FOR MANIACS: AN ALL-NITE TRIBUTE TO EDGAR WRIGHT IN PERSON at the Castro Theatre-August 26, 2011

This year marks the ten year anniversary for Midnites For Maniacs, the brainchild of Jesse Hawthorne Ficks who teaches film history at the Academy of Art University in San Francisco. Ficks shines the spotlight on obscure, overlooked, and forgotten films, which for me is a dream come true. Having been a fan of the series for over a year now, I was super excited upon attending tonight's show: AN ALL-NITE TRIBUTE TO EDGAR WRIGHT. And, big thanks to Jesse, we were treated to having the director himself live and in-person!

At the very beginning of the show, Ficks came out and greeted the completely sold out crowd. After a brief introduction, he brought out the guest of the night Edgar Wright. The crowd immediately came unglued and showered him with cheer, applause, respect, and love, which lasted for several minutes. Ficks interviewed Wright about the first film of the night SCOTT PILGRIM VS. THE WORLD, and asked him some tough questions; the main one being why didn't the film became a boxoffice success last year. Wright defends the film he made and shared with the audience some very funny behind the scenes stories and all the wonderful memories he had making the film.

Before the show began, Wright delighted us with a funny project he did. He asked the audience if we had use the movie information vehicle imdb.com, which everyone raised their hands. As a joke, Wright clicked on the Plot Keywords button to see what kinds of words would pop up for his film. It was hysterical! Words like male underwear and gay character to women's bathroom and video gamer parody. To make things fun and to get the audience to participate, Wright suggested that we should all clap when we would see "coins" appear in the film, which was one of the Plot Keywords. Then it was time to see the film that the critics panned, but lived on as a true, cult, midnight film.

The film SCOTT PILGRAM VS. THE WORLD (2010) stars that young heartthrob Michael Cera in the title role. Scott is a bassist in an up & coming alternative band, dating a high school girl named Knives Chau (Ellen Wong), who is five years younger than he is, and is still not over being dumped by his ex-girlfriend, who's band is the biggest band in the world. Needless to say, Scott's life isn't going to good. However, his life takes a dramatic turn when he meets and falls in love with Ramona Flowers (the lovely Mary Elizabeth Winstead). But Romona comes with some baggage: her seven deadly exes who Scott must battle and defeat to win the heart of Romona. Also appearing in the film are Alison Pill, Mark Webber, Johnny Simmons, Brandon Routh, Chris Evens, Jason Schwartzman, and Kieran Culkin.

I missed out on seeing this film when it was playing in theaters last summer, so this was first time seeing it, and I thoroughly enjoyed it. It was fast, funny, and contained some interesting elements such as video game style editing, awesome soundtrack, great martial arts action, fluid and intricate directing, and of course, hot girls in tight clothes with emo-colored hair. Based on the graphic novel of the same name, this was an amazing, funny, romantic movie that should have been more embraced by people during its original theatrical run. A great film that truly deserves a second look over again!

After the film's end, both Fricks and Wright emerged from behind the curtain and began to discuss the second film of the night, the buddy cop action film HOT FUZZ. Again, Wright did a Plot Keywords gag and came up with some interesting ones, but for audience participation, he chose the words "Stabbed Through the Chin." Then they both disappeared behind the curtin, then lights slowly dimmed, and film began.

HOT FUZZ (2007) stars Simon Pegg as PC Nicholas Angel, London's Finest Police Officer. But when his fellow officers feel that his actions are making them look bad, his captains transfer him to the sleepy little quite town called Sandford. He is paired up with his new boss' son PC Danny Butterman (Nick Frost), a young officer who is obsessed with action cop films such as POINT BREAK and BAD BOYS 2. But when a series of "accidents" point to murder, Angel uncovers a conspiracy that could destroy the name of Sandford.

Now I did see this film in the theaters, and it was funny then as it is funny now. The jokes and gags hold up well, cinematography was beautiful, crisp editing, and of course, wonderfully directed by Wright. This is my favorite film, and with good: an action, adventure, comedy, mystery, shoot e'm up, buddy cop film! Needless to say, I was very happy and excited to see the film on the big screen again.

Both Ficks and Wright came back onto the stage after the film was over, and Wright continued with his Plot Keyword gag for the last film of the night; the film he is most recognized for, and loved all over the world: SHAUN OF THE DEAD. For the film, Wright chose "Disembowelment." for the audience to cheer at.

Ok, if you have not seen SHAUN OF THE DEAD (2004) yet, I have one thing to say to you: where the hell have you been for the past seven years? Upon the film's release, it became a huge success. Fans of the horror genre embraced the film, saying that it was a love letter for George Romero's 1968's NIGHT OF THE LIVING DEAD, arguably the most influential horror film of the last 20th century, and single handily launched the zombie genre. The film contains the perfect blend of horror and comedy, with that classic style British humor. Fans of the film have been spreading their love for it, through Internet chat rooms, fan websites, home movies, and movie screening parties (which numerous drinking games were invented). The film has been hailed as a classic, and it draws new viewers every day.

I saw the film back in 2004, and I immediately told all my friends that they had to see it! Over the years, I've had all my friends, new and old, to come over my house, pizza a drinks abound, and watch the film on DVD. Again, watching it again on the big screen, I was instantaneously teleported back in time to when I saw the film for the first time. And you now what? Thomas Wolfe was wrong, you can go back home! 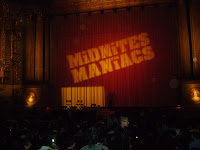 Tonight's event was awesome! I had so much fun and I cannot wait for next month's show! If you'd like to learn more about the Movie For Maniacs, visit their website http://www.midnitesformaniacs.com/

To view the Castro Theatre's film schedule, visit their website at http://www.castrotheatre.com/

Posted by Philip Castor at 9:07 PM