Phil sees RISE OF THE PLANET OF THE APES at the Camera 7 Pruneyard-August 16, 2011

Now when I first heard (and saw the trailer) for this film I thought to myself, "Oh c'mon people! Is nothing sacred anymore? Damn you Hollywood!" I know that sounded extreme, but let's face reality here people, going out the movies has become the equivalent of performing a lobotomy on yourself. Now in 2001, Tim Burton made a remake of one of the greatest and most revolutionary science fiction movie of the last 30 years. That film was THE PLANET OF THE APES, which by the way, in case you haven't seen it yet, don't! It was atrocious! A total waste of time. Now fast forward to today and I went to see RISE OF THE PLANET OF THE APES, a prequel to the series, and I have to say that I was totally blown away by this film! 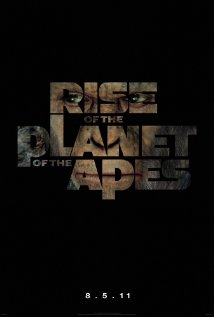 This origin story takes place in the present day in San Francisco, where a young scientist named Dr. Will Rodman (James Franco) discovers a possible cure for Alzheimer's disease, mainly to help cure his father (John Lithgow) who is suffering from the disease. In a strange twist of fate, a baby ape named Caesar (who's mother was experimented on with a developmental drug called ALZ-112) was given enhanced intelligence that made him become more than just a simpleton ape. As he grew older, Caesar became more intelligent, but still maintained basic, primal animal behavior. When Caesar defends Will's father from being attacked by a neighbor, he is thrown into an ape shelter, where he realizes that he is different from the others. Soon he dowses the shelter with the same chemical that Will used on his mother, and the other apes grow smarter and making Caesar their leader. He soon breaks his fellow apes out of the shelter and leads them to freedom within the Redwoods, but both Will and the entire SF Police Department are after them. Also starring in the film are Freida Pinto (Caroline Aranha), David Oyelowo (Steven Jacobs), and Tyler Labine (Robert Franklin).

The original PLANET OF THE APES film was released in the turbulent year of 1968. It was a time of civil unrest in America. The Vietnam War was raging, thus creating a schism among all Americans. There was also the Civil Rights Movement, the Black Panthers, Women's Rights marches, love-ins, drug use, the idea that all you need was love. Many films made during this period helped project this sea of chaos to audiences everywhere. APES was one such film, spotlighting on social issues such as racial tensions, ideology, religion, bigotry, and eradication. In fact, looking back at the five films from the original series, every one of those films  tackled some kind of hot topic and social issue during the time that was made in. Now in the new millennium, we have a new film that deal with nightmares that haunts many of us in our sleep.

This new film tackles a wide variety of issues and topics. The first being the most obvious one: the mistreatment of animals in shelters and in experimental labs. For many years now, PETA and other organizations have been fighting a never-ending crusade against animal cruelty. The film also touches on subjects such as intolerance, science gone wrong, man-made biochemical viruses, animal violence, the annihilation of mankind, evolution, and the existence of God.

The film's director Rupert Wyatt did an incredible job of melding action, suspense, character development, and pathos into a cinematic adventure. It's not easy bringing together all these elements and being able to pull it off so effortlessly. Also worth noting is the extraordinary performance by Andy Serkis, who was the digital performer who gave Caesar's CGI shell life in a way that gives the film a sense of believability. Watching Caesar evolve from a young ape into a influential, intelligent leader is astounding, and Serkis deserves a standing ovation for his performance.

RISE OF THE PLANET OF THE APES is THE summer film that will stand the test of time as one of the best science fiction films of this era. In a sea of Hollywood cliched films, remakes, and 3-D hype, here is a film that is story driven, with amazing characters and great directing. Now how unbelievable is that? A film that actually delivers the goods? Well, that's what you get when apes take over Hollywood.

RISE OF THE PLANET OF THE APES is now playing in theaters nationwide, including at the Camera Cinemas here in the South Bay. To view showtimes, visit their website at http://www.cameracinemas.com/index.shtml

Posted by Philip Castor at 8:23 PM