Relationships can be very tricky. Sometimes they are perfect, just like in the fairy tales, while others are just shy of becoming a horror movie. Love and marriage in the 21st century has become even more problematic, with the divorce rate climbing higher each year. Majority is caused by infidelity, particularly from the men (not to be judgemental, but seeing that I am a man, I have seen this numerous times). Now in some situations, it is the woman who is unable to be faithful, which leads me to CRAZY, STUPID, LOVE, one of the best examples of what happens after the marriage is over. 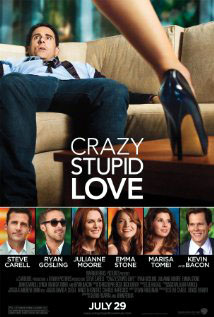 Steve Carell portrays Cal Weaver, a fortysomething man whose life literally falls apart when his beautiful wife of over twenty years Emily (Julianne Moore) admits of having an affair with her co-worker (Kevin Bacon) and wants a divorce. Trying to pick up the pieces of his shattered life, Cal accidentally befriends a player named Jacob Palmer (Ryan Gossling) who reinvites Cal's whole persona and re-introduces him back in to the world of dating. However Jacob's world is thrown for a loop when he meets law student graduate Hannah (Emma Stone), who plants the seed of love in his heart. While Cal succeeds at becoming a suave and sophisticated player, his love for Emily cannot be diminished, and yearns to be by her side again.

Now normally you don't get to see the other side of the story of these scenarios, meaning the male side of it. Majority of the time, it's told from the female's perspective, which is typically the norm for the so called "chick flicks." But here is a film for the men; men who have been cheated on, men who were tossed to the curb by their loved ones, men who have a hard time coping with their loss and the morning that takes place. Here is film for the men, showcasing all these and more, such as male bonding, brotherhood, self realization, self confidence, reinvention of oneself, and discovery aspects that you thought you were incapable of having. The reason we can connect with this film is that every single male out there has gone through this exact same thing numerous times in his life. I myself was engaged once, and had my love of my life leave me for someone else. So I speak from experience, having to witness a small part of my past flash in front of me on the silver screen.

Credit must go to Steve Carell, who totally plays against type and brings life to Cal, a man who has hit rock and we the audience must cheer him on to get back up on his feet and persevere through his ordeal. Also Gossling's discovery of finding love forces Even to re-think about settling down and becoming a family man, which he has no idea on what to do. Of course, the film boasts great performances by Moore and Stone, who are the catalysts that makes Cal and Even evolve throughout the film, and moves the story in a funny, tragic, and heart felt conclusion.

CRAZY, STUPID, LOVE gets my vote as this year's best and overlooked romantic comedy. In a time when Hollywood is hammering down our throats 3-D extravaganzas, comic book superheroes, and remakes disasters, here is a film that plays on our hear-strings, telling a story about real people and real situations that we can all relate to. I highly recommend for all of you to go see this film, and if you are bringing that special someone, after the film remind them just how special they are to you. You'll thank me later for it.

CRAZY, STUPID, LOVE is now playing in theaters nationwide, including at the Camera Cinemas here in the South Bay. To view showtimes, visit their website at http://www.cameracinemas.com/index.shtml

Thanks for reading, and enjoy the show!
Posted by Philip Castor at 10:47 AM