So for the second film I saw this past week, I decided to go across the street to the Camera 3, where they were showing the latest film from acclaimed documentary filmmaker Errol Morris. Now, I love watching his films. They are always so damn entertaining, and unlike some of his peers, his films are unbiased. We the audience are left to decide whether or not we agree with the topic of his film. Or if we entertained or insulted. With his new film TABLOID, we are left to decide whether of not Joyce McKinney is sane or out of her mind. 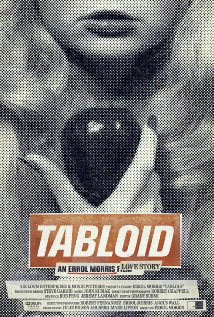 The documentary focuses on Joyce McKinney, a former Miss Wyoming who was living the good life, until she fell in love with Kirk Anderson. Both fall madly in love with one another, but there's a catch: Kirk is a Mormon and soon Kirk is missing. With the aid of a private investigator, Joyce finds out that the love of her life is in England, where she finds him, kidnaps him by gunpoint, takes him to a remote cottage in the English countryside, and forces him to have sex with her.

This is Kirk's side of the story, and the English tabloids ran with that story. In the film, according to Joyce, that's not what happened at all.

Regardless, after Kirk returned home, the Mormon Church got a hold on him, brainwashed him, and told his sick, sordid, and traumatizing tale of vice, violence, and rape to the media. Shortly thereafter, Joyce was thrust into the spotlight, which exposed some interesting light on her somewhat shady past.

Director Morris keeps the facts straight and true, but with hilarious stories to keep the audience entertained. Joyce's story conflicts with those interviewed in the film, but it's hard to keep a straight face while watching her tell her sob story. I'm sorry bit it's one of the best "based on a true story" stories I have ever heard. The film has it all: lost love, kidnapping, romantic getaway, forbidden love, hot sexual adventures, newspaper scandals, dog cloning, you name it, this film has it all covered!

TABLOID is one of the more bizarre documentaries I have seen so far this year, and it's one of the more interesting ones. Morris and his films are always on the fringe of society, but that's where the more interesting stories are. So thanks to Mr. Morris, you will now have to see this film and decide for yourself if Joyce is sane or nutty as a fruitcake. Her fate is in your hands!

TABLOID is now playing in select theaters nationwide, including at the Camera Cinemas here in the South Bay. To view showtimes, visit their website at http://www.cameracinemas.com/index.shtml

Thanks for reading, and enjoy the show!
Posted by Philip Castor at 6:16 PM