Yes friends it's that time again! Time for Comedy Shorts Night at the Niles Essanay Silent Film Museum, located at the historic Edison Theatre in Downtown Niles. Once again I visited my good friend Heather at Bronco Billy's Pizza Palace where I chowed down on the best food in town! After my delicious dinner, I strolled on over the museum, where laughter was to be had by all. As usual, four short films were shown with a brief intermission between them. Judy Rosenberg was on the piano. The first two short films up were: 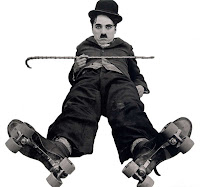 THE CURE (1917): Starring Charlie Chaplin, Edna Purviance, and Eddie Campbell. Chaplin is an alcoholic who checks into a health spa to get sober, however he bring along his trunk which is full of liquor. There he falls for Purviance, who is being hounded by Campbell. However during this courtship, when Chaplin's liquor finds its way into the fountain, it's a raging party that gets out of hand! The film was written and directed by Chaplin. Also known as THE WATER CURE, the film was released by Mutual Films on April 16, 1917.

THERE AIN'T NO SANTA CLAUS (1926): Starring Charley Chase, Eugenia Gilbert, and Noah Young. In the film Charley is a poor schmuck who holds out on the rent so he can by his wife an $80 watch. Unfortunately, the landlord's son discovers the watch and he takes it from him. He also gets a hold of Charley's presents and his Santa Claus beard. Things look bad for Charley, but then good fortune shines on him as the watchmaker informs him that the watch he sold him a cheapo and gives Charley the real watch. Directed by James Parrott (Charley's brother) the film was produced by Hal Roach Studios and released to theaters by MGM on December 12, 1926.

THE SCARECROW (1920): Starring Buster Keaton, Sybil Seely, and Joe Roberts. Both Keaton and Roberts live in a cottage that is well equipped with mechanical devices that makes life easy. However, these two friends are also rivals as they fight over the hand of the farmer's very cute daughter Seely. At one point both Roberts and her father (Keaton's father Joe Keaton) chase good 'ol Buster, and so he disguises as a scarecrow, which causes some hilarious sight gags. A true Keaton classic silent comedy! Written and directed by Keaton and Edward F. Cline, the film was produced by Joesph M. Schenck Productions and was released to theaters on December 22, 1920.

BIG BUSINESS (1929): Starring Stan Laurel, Oliver Hardy, and James Finlayson. The Boys are Christmas Salesmen in sunny California. They ring on the doorbell of Finlayson, and this is where all the fun begins. Damaging private and personal property has never been this hysterical! For years Hal Roach told the story that the crew went to the wrong house and the owners came back to find their home completely destroyed. Whether this is true or not, it's still funny to hear. The film was produced by Hal Roach Studios and released by MGM to theaters on April 20, 1929.

Another fun night at the museum! If you would like to learn more about the museum, their film schedule, and how to become a member, visit their website at www.nilesfilmmuseum.org

Thanks for reading, and enjoy the show!
Posted by Philip Castor at 6:32 PM