Phil counts down to the BIG WOW! COMICFEST at the San Jose Convention Center May 18-19, 2013 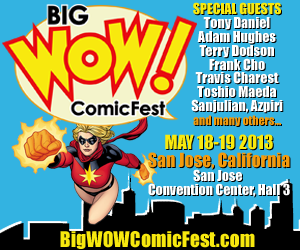 Ladies and gentleman, fanboys and cosplayers rejoice! The Big WOW! ComicFest returns to the San Jose Convention Center this weekend May 18th and 19th! That's right, San Jose's premier comic book show is back with comic book artists, Anima/Manga, cool cosplayers and costume contests, movie stars and so much more!

There are numerous comic book personalities already signed up to appear at the convention and all are icons in the industry: Neal Adams, J. Scott Campbell, Mark Badger, Sergio Aragones, Travis Charest, Adam Hughes, Kevin Nowlan, Barbara Kesel, and Frank Cho just to name a few.

However, the big news is that on Sunday, May 19th, making is only Northern California appearance is none other than Mr. Marvel Comics himself: Stan "The Man" Lee! For those of you who may not recognize this name, Stan Lee is the co-creator of the Marvel Universe. Along artist Jack "The King" Kirby, Lee helped create The Fantastic Four, The Incredible Hulk, Iron Man, The Avengers, The X-Men, The Mighty Thor, and Spider-Man. He's made cameo appearances in every Marvel film to date, and is the founder and CEO of POW! Productions. Stan Lee is a legend in the industry, whose contributions are extraordinary. The comic book world wouldn't be the same without him!

Fans will also meet some of the finest cosplayers around, including Valerie Perez, Ivy Doomkitty, Keith  Carter, and Tally Smith for starters. Then there's all the comic book artists at the Underground and Artist's Alley creating original works of art, the cool Anima area that includes my friend Carlyfornia, plus all the dealers, toys, comics and everything else you can imagine!

There's also cool programs and panels during the two days, including a Geek Fashion Show, Costume Rock Band Challenge, Women in Comics, Filmmaking with Miss Misery, Latinos in Comics, and so much more.

So what are you waiting for? Start planing to attend Northern California's premiere comic book and entertainment event! To learn more about the convention and to purchase tickets and passes, please visit Big WOW! ComicFest's official website at www.bigwowcomicfest.com.

Thanks for reading, and enjoy the show!
Posted by Philip Castor at 6:47 AM