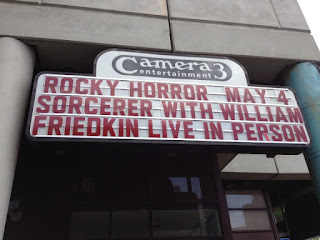 This past Sunday I had the extraordinary pleasure to attend a free screening of SORCERER, the 1977 film directed by legendary filmmaker William Friedkin. This rare 35mm film print screening was presented by Camera Cinema Club's Director Tim Sika, host of KSJS's long-running Celluloid Dreams show. Upon my arrival, the theater was already packed to the rafters, but fortunately I found great spot right in the front row!

Tim came on stage and thanked the enthusiastic crowd for coming out to attend this very special screening of this lost cinema classic. Afterwards, he welcomed Mr. William Friedkin up to the stage. The audience rose to their feet and gave William one hell of a San Jose welcome. Since I was seating in the front row right by the stairs, William walked right by me and shook my hand!! That's right!! William Friendkin shook my hand!! Tim handed William the microphone and he made a brief intro about the film. Soon, the lights dimmed and the film began.

The film's official synopsis: A group of outcasts from different backgrounds/nationalities are forced by misfortune to work in a remote oil drilling operation in South America. When fire breaks out of control, four of the outcasts are given the opportunity to earn enough money to get out by transporting six crates of unstable dynamite through miles of jungle in two ancient trucks. Will they succeed and regain their honor and citizenship, or get blown up for their efforts?

The film was just outstanding to watch! Friedkin spent over two years in five countries on three continents making the film. This was his follow up to his hit film, 1973's THE EXORCIST. The film is actually a remake of the 1953 French film THE WAGES OF FEAR. Utilizing a combination of hand held camerawork, real locations and settings, and dangerous weather conditions, it's a wonder that nobody got hurt or killed! Parts of the film feel like a documentary, capturing the looks a feel of the old European films from the 1960s. It's that Do-It-Yourself look and feel that gives the film that high level of authenticity.

The only real star in the film was Roy Scheider, who starred in Friedkin's 1971 film THE FRENCH CONNECTION and Steven Spielberg's 1975 summer hit JAWS. Here he portrays Jackie Scanlon, a gangster who hides out in a small town in Central America under his new identity Juan Dominguez. Scheider is great in this role, bringing depth and sympathy to his character. Scheider has appeared in numerous films and television projects. He passed away on February 10, 2008 at the age of 75.

After the screening, Tim conducted a fun and informative Q&A with Friedkin. Now let me just say this: this man is a gifted storyteller. All is stores he shared with the audience were hilarious! He shared interesting stories about his interview with Linda Blair, how he bribed his way to do the the infamous subway chase in THE FRENCH CONNECTION, how he made his latest film KILLER JOE in just five weeks, and all the crazy things that happened during the filming of SORCERER. He also mentioned that the film will be available on Blu-Ray later this year.

After the Q&A, Friedkin was having a signing in the theater's lobby, where his new memoir, The Friedkin Connection were being sold. Yours truly purchased a copy of his book and had it signed! And let me tell you something: it's a hard book to put down. I only read the first chapter and it's a page turner!!

SORCERER is truly an astounding film, one that really does need to be rediscovered! Now that it will be released to the public later in the year, fans of cinema will be able to witness the genius of William Friedkin!! 5 it of 5 stars!! Highly recommended!


SORCERER will be released on Blu-Ray later on this year. In the meantime, pick up a copy of William Friedkin's new memoir, The Friedkin Connection. Retail price $29.99. To purchase a copy, visit you local book retailer or visit the Amazon website at www.amazon.com.

Thanks for reading, and enjoy the show!
Posted by Philip Castor at 4:07 PM