Well, it's over. The fat lady has sung. The final curtain call. Game over man. What am I trying to say, you may be asking? I'm talking about THE HANGOVER PART III, the final chapter chronicling the misadventures of the infamous wolfpack. However, I'm sorry to report that this was not a funny movie to end the series on. 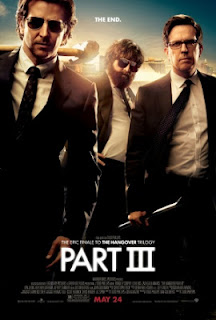 The film's official synopsis: In the aftermath of the death of Alan's (Zach Galifianakis) father, the wolfpack decide to take him to get treated for his mental issues. But things start to go wrong on the way to the hospital as the wolfpack is assaulted and Doug (Justin Bartha) is kidnapped. Now Alan, Phil (Bradley Cooper), and Stu (Ed Helms) must find Mr. Chow (Ken Jeong) again in order to surrender him to the gangster named Marshall (John Goodman) who kidnapped Doug in order to save him.

The film tries to be funny but fails to become funny every step of the way. While we are taken to both Tijuana and back once again to Las Vegas, the laughs and sight gags are few and far between. Director Todd Philips (ROAD TRIP, OLD SCHOOL, and THE HANGOVER films) does a fine job of directing the film, capturing the beauty  of the scenic locations of Mexico and the bright lights of Sin City, but  in the end, the jokes fall flat. Fall flat on its ass. All the jokes sucked. Just making sure that what I'm saying is crystal clear.

This is a perfect example of what's wrong with Hollywood. When the first film came out in 2009, it was hailed has one of the funniest films of the 21st century. But when it made an enormous amount of money at the box office, the studio saw dollar signs and became greedy. It was a stupid idea to try and make a sequel in the first place because how do you top the first film? The comedy in THE HANGOVER was so over the top and so outrageous, the next film would look lame and pathetic in comparison. This was what happened with the PART II and we witness it again here with this film.

Also, here's something that I don't get. It's called THE HANGOVER PART III, but there is no hangover in the film. Granted, there's a bonus scene in the credits that takes place after a wedding and the whole gang wakes up and are all hungover. So there you go but that's it. It's also worth noting that the 4 minute bonus scene was funnier than the entire 90 minute movie. Yup, that's pathetic!

THE HANGOVER PART III is a waste of time and not even worth a look. It's not even worth renting, or streaming, or anything. In lament terms, the film sucked ass big time! 2 out of 5 stars, only because of the hilarious bonus scene.


THE HANGOVER PART III is currently playing in theaters nationwide, including the Century Theaters here in the Bay Area. To view showtimes, visit their website at http://cinemark.com.

Thanks for reading, and enjoy the show!
Posted by Philip Castor at 11:46 PM