In the year 2009, writer/director J.J. Abrams did the impossible. His re-imaging of STAR TREK was a huge summer blockbuster, injecting the stale franchise with a major shot of adrenaline for the 21st century audiences to enjoy. Now in 2013, Abrams releases the next chapter in the rebooted series. STAR TREK INTO DARKNESS expands on the characters we've all come to know and love while giving us one of the greatest villains of all time. 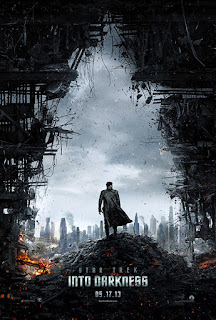 Here is the film's official synopsis: When the crew of the Enterprise is called back home, they find an unstoppable force of terror from within their own organization has detonated the fleet and everything it stands for, leaving our world in a state of crisis. With a personal score to settle, Captain Kirk leads a manhunt to a war-zone world to capture a one man weapon of mass destruction. As our heroes are propelled into an epic chess game of life and death, love will be challenged, friendships will be torn apart, and sacrifices must be made for the only family Kirk has left: his crew.

What I enjoyed about the film was that we get to know more about the characters. Kirk (Chris Pine) is still a brash, impulsive, head strong young man who has so much potential, but thinks he's above rules and regulations. Since the film is supposed to take place before the original television series, we get to see what the crew of the Enterpise was like when they were still young and green. In the case of Kirk, the events that transpire in the film will no doubt shape him into becoming the great captain that he is destined to become.

However the big star of the film is Benedict Cumberbatch, who's Kahn is one of the greatest villains to ever grace the silver screen. Unlike the previous incarnation, this Kahn is far more intelligent, more cunning, and more vicious. His mind is like a steal trap. His plans are far more deadlier. His body is a lethal weapon. And this Kahn has no problem with killing someone with his bare hands. Not since Heath Ledger's Joker in THE DARK KNIGHT have we seen a villain so terrifying!

The entire cast from the first film are once again reunited for this successful sequel. All turn in great performances. But like all sequels, there are some new blood injected into the mix. Joining in on all the fun is actor Peter Weller, who's famous for the playing the lead in the 1987 film ROBOCOP. Here, Weller portrays Starfleet Admiral Alexander Marcus, who knows more about Kahn than he's letting Kirk on. Also appearing in the film is the beautiful Alicia Eve as science officer Dr. Carol Marcus, daughter of Admiral Marcus and potential love interest for Kirk. Both of these two make the film much more interesting as well as intense.

Overall STAR TREK INTO DARKNESS is on helluva sci-fi, hi-octane, roller coaster ride of a sequel! It's action packed, it's humorous, it's unpredectable, it's just a damn good movie! Don't believe me? I saw the film TWICE IN ONE DAY!! That's right people! I saw it in 2D, loved it, walked to the boxoffice and saw it again in 3D! BTW the 3D effects were spectacular! So if it's in 3D see it! If not, see it still!! 5 out of 5 stars!! Highly recommended!!


STAR TREK INTO DARKNESS is currently playing in both 2D and 3D in theaters nationwide, including the Century Theaters here in the Bay Area. To view showtimes, visit their website at http://cinemark.com.

Thanks for reading, and enjoy the show!
Posted by Philip Castor at 11:39 PM