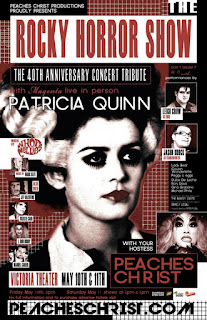 Now as many of you are already aware, I'm a big fan of THE ROCKY HORROR PICTURE SHOW. I attended the regular monthly midnight screenings at the Camera 3 with my friends Barely Legal, I've done the Time warp dance numerous times. I thought I've done it all, but I was wrong. Recently I had the pleasure of heading back out to San Francisco with my good friend/make-up artist Michelle Snyder to attend the Peaches Christ production of THE ROCKY HORROR SHOW: THE 40TH ANNIVERSARY CONCERT TRIBUTE! Also making this even more extraordinary was the addition of Magenta herself, Patricia Quinn was there live in-person. All this ROCKY fun was held at the Victoria Theatre (San Francisco's oldest operating theatre) over in the Mission District.

There were three shows at three different times: Friday, May 10th at 8pm, then Saturday, May 11th at 3pm and 8pm. Michelle and I went to the last show on Saturday. Upon arriving at the theatre, we made our way to the front row (as we always do) so we can take in all this Peachy goodness fun! The air in the Victoria was intoxicating! The energy level was off the charts. The audience was really fired up. Then The Bawdy Caste (the ROCKY shadowcast that performs here in the city and in Menlo Park) showed all the newbies (AKA virgins) how to do the Time Warp dance. They left the stage right after, and the lights dimmed, and the show began!

Peaches came out looking absolutely gorgeous! Fans were screaming and shouting and whistling! She greeted the audience and explained that this year marks the 40th anniversary of the original musical play, which was created by Richard O'Brien (who played Riff Raff in both the play and the movie). After Peaches finished her introductions, it was time for the show to begin!

Singing the song's intro was Magenta herself: Patricia Quinn!! The entire audience went completely crazy!! Hearing Mrs. Quinn singing "Science Fiction/Double Feature" was incredible!! I was jumping and screaming like a little girl!! After the she finished her song, Peaches came back out to narrate the show.

The entire cast was outstanding! This is what a rock'n'roll show should be! So much singing and dancing! Drag queens rocking out! People doing the Time Warp! There were so many highlights that it is just too damn difficult to list. But if I had to list just one, it would be when Jason Brock (one of the Dr. Frank-N-Furters that night) was belting out a heart warming rendition of "I'm Going Home." That performance literally made everyone gasp for air and they all gave Jason one helluva standing ovation! At the end of the show, Patricia Quinn returned to the stage to sing the closing song.

After the show was over, Peaches conducted an interview with Patricia Quinn, who regaled audiences with funny and interesting personal stories that made the audience laugh. The Mrs. Quinn participated in a rousing Q&A session. The my friends from Barely Legal came on-stage as judges for the costume contest. Then Patricia did an autograph session for all her fans!

This was one night I will not forget for a very long time! Now this was the big kickoff for what Peaches Christ has dubbed "The Summer of Peaches!" All summer long there will be Peaches shows for all her fans to enjoy! The first of these events will be A NIGHTMARE ON ELM STREET 2, which will take place on June 22nd during the Frameline Film Festival 37. Then on July 13th, Peaches will screen THE CRAFT. And finally, on August 24th, it's the annual SHOWGIRLS event. All three shows will be at the historic Castro Theatre and ticket for all three shows are on sale now! To purchase your tickets for these shows, please visit Peaches' official website at  www.peacheschrist.com.

Posted by Philip Castor at 4:13 PM