Phil hosts the Cult Movie Screening of SPACEBALLS at the Camera 3 in Downtown San Jose-May 16, 2013

Hello again everybody and welcome to Month Four of the 2013 Cult Movie series at the Camera 3 in Downtown San Jose! Now for those of you who are late to the game, let me explain this cool series. In 2011 the Camera Cinemas started up the Cult Movie series (which for years had been called the Midnight Movie series). They would show one cult film twice a month (Thursday nights at 9:30 and Saturday nights at midnight) from February through November. Tonight we screened the Mel Brooks' 1987 sci-fi/comedy classic SPACEBALLS. Once again yours truly was back as the host for tonight's screening. Prizes were donated by Streetlight Records and by Time Tunnel Toys, both located here in San Jose. There were also yummy donuts to eat, courtesy of Psycho Donuts located in the lobby. 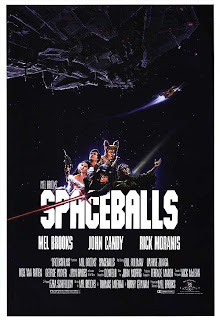 The film's official synopsis: King Roland (Dick Van Patten) of the planet Druidia is trying to marry his daughter Princess Vespa (Daphne Zuniga) to Prince Valium, but Vespa is kidnapped by the evil race of the Spaceballs, led by the ruthless Dark Helmet (Rick Moranis). The Spaceballs ask Roland a tremendous ransom: all the air of Druidia (you see, the air of Spaceball had serious pollution problems...). The King decides to offer a generous amount of money to a space rogue, Lone Starr (Bill Pullman) and his partner Barf (the late John Candy), to persuade them to save Vespa. What follows is the parody of a LOT of famous sci-fi movies (STAR WARS, ALIENS, STAR TREK, and THE WIZARD OF OZ just to name a few).

The film was directed by Mel Brooks, who has made several of the all-time classic comedy films of all time. This list is endless: THE PRODUCERS, BLAZING SADDLES, YOUNG FRANKENSTEIN, SILENT MOVIE, HISTORY OF THE WORLD: PART I, and ROBIN HOOD: MEN IN TIGHTS for starters. The cast reads like a who's who: Rick Moranis and John Candy were on the cult Canadian TV show SCTV and have appeared in numerous film throughout their career. Dick Van Patten is famous for his role as Tom Bradford from the TV show Eight Is Enough. A young Bill Pullman can be seen here, of course he would go on to appear in films like INDEPENDENCE DAY, LOST HIGHWAY, WHILE YOU WERE SLEEPING, and BOTTLE SHOCK. Actress Daphne Zuniga has starred in films like THE SURE THING, THE FLY II, THE INITIATION, and TV shows like Melrose Place, Models Inc., and One Tree Hill.

The film was released to theaters by MGM on June 24, 1987 and was met with a mixed reception. The film's budget was $22.7 million and grossed only $38,119,483. So the film was not a success at all, however, it went on to become a cult classic once it was released on VHS. Now it is considered one of Mel Brooks' finest (and funnest) films!


Now like I said, the Camera 3 will be showing one cult classic film every month from now till November. Next month we'll be screening the 1992 David Lynch film TWIN PEAKS: FIRE WALK WITH ME on June 13th and again on June 15th. So make plans to attend this screening folks! To view their upcoming schedule, visit the Camera Cinemas website at www.cameracinemas.com.

Thanks for reading, and enjoy the show!
Posted by Philip Castor at 5:35 PM