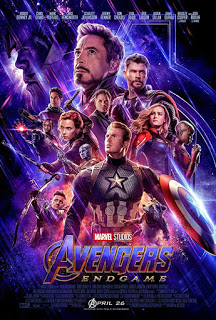 After a long five days of watching silent films in San Francisco, I decided to treat myself to a flick at the Cinelux Theaters. Because I was attending the 24th San Francisco Silent Film Festival, I was itching to see a new movie! A plethora of new movies were released, and I was super excited to see them all! But instead, I went and saw AVENGERS: ENDGAME again! Why did I see it again, some of you are asking? Because I felt like it!! Plus I really, really liked the movie!

When I saw it at the Thursday Night Preview screening, I didn't have the best seat to really watch the film and to pay attention to all of the details within its frames. One was why did the Avenger fly Star-lord's ship to confront Thanos when Thor's new battle-axe Stormbreaker can open the Bifröst? How was Steve Rogers able to return the Infinity Stones in their current state when they were all in their original forms? And when Steve returned the Soul Stone to , what was his confrontation with the Red Skull was like? These are just some of the questions that popped in my head upon my second viewing. But overall, I love this freaking movie!

AVENGERS: ENDGAME is currently playing in theaters in 2D, 3D, and IMAX nationwide, including at the Cinelux Theaters here in the Bay Area. To view showtimes, visit their website at www.cineluxtheatres.com.

Thanks for reading, and enjoy the show!
Posted by Philip Castor at 6:54 PM