Hello my friends, and welcome to day two of my trip to the Broncho Bill Silent Film Festival at the Niles Essanay Silent Film Museum at the historic Edison Theater in the Niles District of Fremont! After last night's show, I couldn't wait to travel back in time when silent films still reigned supreme! And to make things interesting, I'll be posting my blogs immediately after each program screening, so I can provide all of you the play by play of the festival! Let's begin shall we?

For the 12:30pm show, the museum hosted an amazing interview with the great Murray Glass, founder of the Em Gee Film Library. The interview was conducted by film historian David Shepard. Glass talked about his early days when he first started collecting film prints while working as a chemist. After several years of collecting films and receiving requests from academic scholars asking to borrow his prints, Glass quit his day job and started working full time on his once called "hobby." His library consisted of over 6,500 film prints, mostly silent films. After 50 years of film collecting, preservation, and making his films available for screening all over the world, Glass retired and donated his vast film collection to the museum. After the interview, Glass participated in a Q&A session with the audience. The museum president Dorthy Bradley presented Glass with an award for his lifetime dedication to film preservation and made him an honorary member of the Essanay Museum.

After a brief ten minute break, the show continued with a surprise short film from Glass: 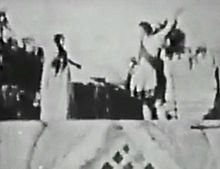 BEN HUR (1907): Starring Herman Rottger as the Ben Hur and future cowboy star William S. Hart as Messala, this was the very first film version of Lew Wallace's novel. Though only 15 minutes long, the film The focused on the chariot race, which was actually filmed on a beach in New Jersey (most films were made on the East Coast) and had local firemen playing the charioteers and the horses that normally pulled the fire wagons pulling the chariots. It was very interesting to see and quite fun to watch! Hard to believe that this was the very first adaptation and I along with the audience got to see this very rare gem! The film was released by the Kalem Film Company on December 7, 1907.

The main feature of the program was SILK HUSBANDS AND CALICO WIVES (1920).  The film focuses on an up and coming lawyer Deane Kendall (House Peters), who has some very old fashion ideas about a woman's place in the home and in society. Of course this doesn't stop the love of his life Edith (Mary Alden) from marrying him. But when Deane begins to move up in society, she must be able to keep up with him or else she lose him to another woman named Georgia Wilson (Eva Novak). The film was directed by Alfred E. Green, who went on to direct other silent films like 1921's THROUGH THE BACK DOOR and LITTLE LORD FAUNTLEROY (both starring Mary Pickford), 1925's SALLY with Collen Moore, and 1927's TWO GIRLS WANTED starring Janet Graynor. Peter also acted in films like Cecil B. DeMille's THE GIRL OF THE GOLDEN WEST, 1922's THE STORM, and a film that was shown here at the museum last year, RAFFLES: THE AMATEUR CRACKSMITH. The film was distributed by Garson Studios in 1920.

And that was it for the early afternoon show! At the 3:30pm show the museum will be screening Broncho Billy films made here in Niles! So make sure you come on down and check out all the fun! If you'd like to come check out the festival, be sure to visit the Niles Essanay Silent Film Museum's website at http://www.nilesfilmmuseum.org./

Posted by Philip Castor at 6:42 PM