Phil sees PROMETHEUS in 3D at the Camera 7 Pruneyard Campbell-June 17, 2012

The following film has been kept in secrecy since the very beginning. Rumors spread all over the internet, in chatrooms, on Twitter, Facebook, horror blogs, and movie websites. But when is was revealed that director Ridley Scott, the man who healmed such iconic films such as BLADE RUNNER, LEGEND, THELMA & LOUISE, GLADIATOR, AMERICAN GANGSTER, the list is endless. Then rumors started to spread that the film was a prequel to ALIEN, Scott's 1979 horror/sci-fi classic. With each new information that was released, the anticipation for the film grew and grew. Now it has been released, and I had the pleasure of seeing PROMETHEUS in 3D at the Camera 7 in the Pruneyard Campbell. 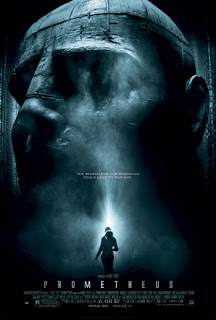 In the year 2089, archaeologist couple Elizabeth Shaw (Noomi Rapace) and Charlie Holloway (Logan Marshall-Green) discover a series of star maps among several unrelated ancient cultures, a kind of invitation to come and visit. With the financing of a mega-corporation called Weyland Industries, they and a team of scientists and soldiers travel aboard the spacecraft Prometheus to answer the mysteries of life and discover the origins of man. Their ship finally arrives on the planet in 2092 and the crew awakens from their two-year slumber and are greeted by Weyland Industries executive Meredith Vickers (Charlize Theron) and the ship's faithful robot servant David (Michael Fassbender). However, once the crew begins to explore the ancient ruins, they soon discover that the answers they seek have deadly answers.

Scott's directing is beautiful. Just beautiful. The film is just visually stunning. Watching one of Scott's films is like admiring a painting; it really does take your breath away. He makes directing look so damn easy, but like a great painter, his brushstokes are precise and engaging. The atmosphere of the film is also beautiful as well as haunting and ominous. We aren't sure what to expect, and Scott very carefully escorts us on this journey. And we don't even hesitate to ask where he's taking us.

What I also liked about the film is that it explores many philosophical and deep meaning questions that we have been asking since the dawn of man. It explores the questions like "Why are we here?" "Where do we come from?" "Are we alone in the universe?" The film also invokes topics that never crossed my mind; Do other life forms believe in religion? Are we descendants of these visitors? And if we are, where does God fit in the equation? And also would we still believe in Him and the various religions? Would you ask them the same age old questions as well? Now maybe I'm reading too much into the film, but these are ideas that I found within the film. Whether these were intentional or accidental, one has to wonder if Scott and his screenwriters Jon Spaihts and Damon Lindelof knew what they were doing.

The acting in the film was above average. Some of the secondary characters were one-dimensional and I didn't care what happened to them. But that's their purpose; to that we'll invest in the main players. Fassbender does a fine job of portraying David; sharp, mysterious, and at times funny. With this role, he continues a very long tradition of actors portraying robots in the ALIEN series. Fassbender has been one very busy actor as of late. This is his third film so far this year! (The other two were Cronenburg's A DANGEROUS METHOD and the indie sex drama SHAME) Also making her presence known is Rapace. Internationally known as Lisbeth Salander in the original GIRL WITH THE DRAGON TATTOO trilogy, her first Hollywood film was SHERLOCK HOLMES: A GAME OF SHADOWS, which was released back in January. While her character Elizabeth (how ironic) is no Ripley, she does her best and holds her own in the film's many obstacles, including the gut-wrenching aliens that she and her crew discover.

While not officially a prequel to the ALIEN franchise, it is speculated that the "Space Jockey" that Ripley and her crew discover in Scott's first ALIEN film is the same one found here. Now, Scott has stated that the film shares "strands of ALIEN's DNA, so to speak", and while it takes place in the same universe, the film stands on its own and explores its own mythology.

Now the only negativity I have about the film is the use of 3D for it. In my opinion, this gimmick was totally unnecessary. Scott's film didn't require this gimmick at all, and to whomever thought it this was a good idea, let me say this: It wasn't a good idea! All his films are works of art and to use the 3D gimmick is an insult to the man and his talents.

Overall, PROMETHEUS is a visually stunning and haunting film that takes the ALIEN mythology that Scott created decades ago and transforms it into something totally new and different! It is a film that really explores our questions and fears, and at the same time gives us some chills to terrify us with. But avoid seeing it in 3D, and instead use that money you saved to buy more popcorn. Four out of five stars!


PROMETHEUS is playing in both 2D and 3D in theaters nationwide, including at the Camera Cinemas here in the Bay Area. To view showtimes, visit their website at www.cameracinemas.com.