Phil sees ROCK OF AGES at the Camera 7 Pruneyard Campbell-June 17, 2012

So it's been a while since I've seen a cool musical, and I'm not counting the screening of REPO! THE GENETIC OPERA that I attended last month at the Big Wow! Comicfest. The reason being is because that film was a rock opera. I'm talking about a straight ahead, singing and dancing, make your feet tap and your booty shaking in your seat musical. So for today I ventured out to the Camera 7 in the Pruneyard in Campbell to see ROCK OF AGES, the newest film by HAIRSPRAY director Adam Shankman. 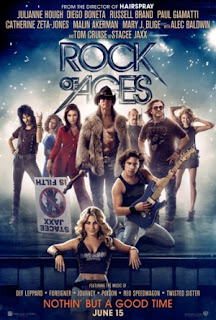 Based on Chris D'Arienzo's Broadway show, the film is set in 1987 and opens on a young girl named Sherrie Christian (Julianne Hough), who travels from her hometown of Tulsa, Oklahoma to Los Angeles with dreams of becoming a famous singer. Immediantly arriving in LA, she is mugged and her suitcase full of inspirational rock records is stolen. However, coming to her aid is another rock'n'roll dreamer by the name of Drew Boley (Diego Boneta), who just so happens to work at The Bourbon Room (a hybrid of The Viper Room and The Whiskey), a popular nightclub on the Sunset Strip. Drew convinces his boss and club owner Dennis Dupree (Alec Baldwin), and his right-hand man, Lonny Barnett (Russell Brand) to hire Sherrie as their new waitress. While our two love birds sing and dance their way into each other's hearts, the club is preparing to book the hard rock band Arsenal in hopes of raising enough money to clear up their debt. Another reason for this show is that this will be their final show before its enigmatic lead singer Stacee Jaxx (Tom Cruise) moves on to his solo career, thanks to the advise of his manager Paul Gill (Paul Giamatti). But leading the charge against Jaxx and the Bourbon Room is Patricia Whitmore (Catherine Zeta-Jones), the religious conservative wife of Mayor Mike Whitmore (Bryan Cranston). She plans on organizing her church to protest in front of the Bourbon Room in an insane attempt to shut them down and to rid L.A. of its "sex, drugs, and rock 'n' roll" image.

Shankman did a fabulous job with directing and choreographing his last film HAIRSPARY, and he repeats himself with this film. It's fun, well paced, and is filled with several 80's fist-pumping metal and hard rock classics. Country singer Hough plays Sherrie spot on: sweet, funny, down home Southern accent, and a nice set of pipes that makes you take notice. While she has only appeared in two other films (BURLESQUE and the 2011 remake FOOTLOOSE), Hough looks to be going places. Her fresh face look and singing chops mesh perfectly with Boneta's, who is known for his TV roles on 90210 and Pretty Little Liars. Their duet of "Jukebox Hero" inside of the Tower Records store (I really miss them) is totally bad ass! And by melding it into a melody with Baldwin and Brand's cover of Joan Jett's "I Love Rock'N'Roll" only made it that much more rockin'!

But to be fair, one individual rocked out the hardest. Now, I am not a big Tom Cruise fan. Really, I'm not. Oh sure I liked his earlier films like RISKY BUSINESS and TOP GUN. And I did like his performance as Senator Jasper Irving in LIONS FOR LAMBS, but I never went out of my way to see one of his starring films. But I have to admit, Cruise really rocked out in this film. I would have to say that his performance as Stacee Jaxx was part Jim Morrison of the Doors, part Axel Rose, and part Jon Bon Jovi. There is no trace of Tom Cruise in the film. There is only the Rock God Stacee Jaxx! And speaking of great performances, Zeta-Jones channels Tipper Gore for her role as the righteous Patricia Whitmore. Also look for cameo appearances from director Eli Roth, former Skid Row lead singer Sebastian Bach, former Extreme guitarist/vocalist Nuno Bettencourt, REO Speedwagon lead singer Kevin Cronin, and believe it or not, Debbie Gibson!

All in all, ROCK OF AGES is a head banging, rock'n'roll good time! So if you lived in L.A. on The Strip back in the 80's (or you wish you had), this might take you back to the good 'ol days when hairspary, eyeliners, spandex, and hard rock ruled! Four out of five stars!


ROCK OF AGES is currently playing in theaters nationwide, including at the Camera Cinemas here in the Bay Area. To view showtimes, visit their website at http://www.cameracinemas.com.

Thanks for reading, and enjoy the show!
Posted by Philip Castor at 4:29 PM