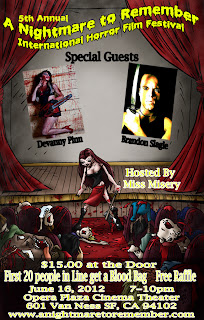 This past Saturday night I was very fortunate and extremely privileged to be invited to the 5th Annual A Nightmare To Remember International Horror Film Festival, held at the Opera Plaza Cinema Theater in San Francisco. The festival is organized and  hosted by the talented Reyna Young, better know to all of us here in the Bay Area as horror film hostess Miss Misery. She has appeared on local television shows, such as the late night horror show Creepy KOFY Movie Time on KOFY Channel 20-Cable 13 and at conventions all throughout Northern California. She started the festival back in 2008 to bring local, nationwide, and international independent horror short films here to the Bay Area.

The night began with horror fans meeting some famous celebrities in the theater's lobby. There was the great John Stanley who, along with his late predecessor Bob Wilkins, hosted the legendary local television show Creature Features. Scream Queen Debra Lamb, who has appeared in classic B-horror films such as EVIL SPIRITS, THE INVISIBLE MANIAC, BEVERLY HILLS VAMP, and the upcoming horror film DISCIPLES, was the celebrity judge for tonight's event. Also attending were two very special guests: actress Devanny Pinn (NUDE NUNS WITH BIG GUNS, SONG OF THE SHATTERED, and DIARY OF DEATH) and actor/writer/director Brandon Sleagle (VIViD, THE LOCALS, and THE MASK THAT THE MONSTERS WEAR). Also in attendance was independent filmmaker Dave Reda (BIT PARTS, MY UNDEADLY short film). After hanging out with both filmmakers and movie goers, Miss Misery begun tonight's horror festival.

The show began with some very cool trailers: AMERICAN MUMMY by writer/director Charles Pinion (which will be in 3D), BEAUTY BITES by filmmaker Shane Maus, and THE DEVIL'S CARNIVAL by director Darren Lynn Bousman and Terrance Zdunich, the creative team that brought us the cult hit REPO! THE GENETIC OPERA. After these cool trailers, the short films were shown!

First film up was BAPTISM BY FIRE. The film's about two injured soldiers Isaac (Charles Solis) and Oscar (Sam Salter) recovering in a military hospital. Issac is haunted by the casualties of war and what he has done.  Then one night Issac is visited by his former comrade Piggy (Raymond Garland), who was left behind by Issac and his platoon to die. But Piggy survived and now wants revenge Isaac. The film was directed by Craig Surko and it contains some interesting ideas, such as the psychological ramifications of those who fought in wars and the guilt that they carry with them long after the shooting stops. Creepy and atmospheric, this was a great film to start the festival off with. To learn more about the film, visit its official website at http://surkoc1.wix.com/baptismbyfire.

The second film screened was DOLL PARTS, a visually haunting and disturbing film by director Karen Lam. The film follows a serial killer named Edward (David Lewis) who while driving on a lonely stretch of road picks up a female hitchhiker (Sarah Lind). He ties her up, kills her and rapes her dead body. However there's just one problem: she's not dead! And she's not exactly human! Boasting some great acting, very cool gore and amazing special effects, this was one fantastic short film! Can't wait to see more from director Lam! To learn more about Lam's films and future projects, visit her official website at www.karenlamfilms.com.

Third film shown was Reda's MY UNDEADLY. In the film a woman is being stalked by an undead zombie, but this awesome horror/comedy has a fun twist ending that made the audience laugh! For those who wish to spice things up in the bedroom, take notes from this film! Reda wrote, produced, directed, and starred in the film along with scream queen Michelle Tomlinson. A cool bonus trivia: the film was shot in the original Michael Myer's house that was used in the original HALLOWEEN! Overall a great short film! To learn more about Reda and his production company Elftwin Films, visit their official website at http://elftwinfilms.com.

Film number four for the night was THE HAUNTED SHIP. Created by Alex Zinzopoulos, Jack Skyyler, and Joel Brook, the film's about four friends who break into the U.S.S. Salem, known as the "Sea Hag." Once inside, they soon discover that the rumors about the ship being haunted are true and must survive until dawn. The film was shot in both narrative as well as POV, with the last being influenced by the 1999 film THE BLAIR WITCH PROJECT. In my humble opinion, the found footage idea has been done to death. However in this case, the amalgam of both of these styles proved somewhat effective, and the film does contained some believable acting. Also known as INFESTED SHIP, the filmmakers are in production of turning this short film into a full length feature. To learn more about the film and its directors, visit their website at http://www.dearskyyler.com.

The fifth film of the festival was one of my favorite films of the night! Directed by Patrick Rea, HELL WEEK is about a fraternity pledge named Luke (Jerod Meagher) who finds himself tied up and at the mercy of three scorned sorority sisters: Aubrey (Molly Anderson), Mitzi (Meg Saricks), and Marla (Tasha Smith). This beautifully directed film was very slick looking, contained great production values, brilliant acting, and a killer soundtrack. Now this what a short film should be! To learn about the film and about the production company SenoReality Pictures, visit their website at www.senoreality.com.

The sixth film of the night was THE GRAVEYARD SHIFT, directed by April Wright. Kenny (Taylor Gerard Hart) is the new parking lot security guard on the graveyard shift. All seems going well until a woman (Jenna Johnson) overdoses in her car on his watch, but things are not what they appear to be. I had the privilege of meeting Wright years ago when her film LAYOVER was screened at the Cinequest Film Festival. With this film, she does an effective job of creating mood and some chills. To learn more about Wright and her films, visit her official website at www.april9entertainment.com.

Film number seven was another one of my favorites screened. Imported all the way of Spain, PROFESSOR BROFMAN was one funny horror/comedy! In the film, Brofman (Bruto Pomeroy) is called in the dead of night by a married woman (Lló Venturini) who suspects that her husband (Paco Maestre) is a vampire. And what role does the young, busty, and sexy maid Doncella (Beatriz Olivares) have in this scenario? The whole film is played for laughs, and comes complete with musical numbers, a love triangle, and a midget playing a ukulele! What more do you need? To learn more about the film, visit its official website at www.promofest.org/films/profesor-brofman.

The eight film up was the abysmal JESSICA, directed by Jason Mills. Inspired by true events, basically the film is about a young girl named Jessica who becomes possessed at a Bible Camp. She runs away. The camp counselors follow her. She stops. They stop. She then turns back to normal. Everyone is happy and relieved. The End. This was the worst film of the night. It contained no real plot, no character development, it had nothing. So if this was based on true events, then what was the whole point of the devil possessing Jessica in the first place? Why was this film made I have no idea, but it was totally unnecessary.

PHOTO was the ninth film screened and was my third favorite film at the festival. Directed by J. Enrique Sánchez, this suspenseful thriller (also from Spain) tells the story of a photographer (Juanjo Artero) and his customer (Patxi Freytez). The film's tag line is, "He only needed one photo. A good one." The film has a TWILIGHT ZONE ending to it, which was a complete surprise and the look of it was polished and well made. Overall a great film! To learn more about the film, visit its official website at www.promofest.org/films/photo.

The tenth film screened was a favorite among the audience, and it was my absolute favorite as well! FAMILIAR tells the story of John Dodd (Robert Nolan), a middle aged man who is looking for a way out of his mundane life and to escape from his work and his family: wife Charlotte (Astrida Auza) and his daughter Jordan (Cathryn Hostick). He hears a voice in his head and believes (as well as we the audience) it's his inner thoughts. He begins to act on them, but he soon discovers to his horror that the voice he's hearing may not be his after all. Director Richard Powell did an outstanding job with this film. The film is scares us right from the start, giving the audience chills that stay with them during the course of the film. Nolan also deserves a worthy note for creating one of the most disturbed and chilling characters in cinema, the like not seen since Norman Bates in PSYCHO. It was truly the gem of the night! This dark psychological creeper of a flick is required viewing! FYI: The film was also recently reviewed in the Canadian Horror magazine Rue-Morgue (June issue #123 to be exact). To learn more about the film and all future project from Fatal Pictures, visit their website at http://fatalpictures.wordpress.com.

The last film of the festival was LADY IN THE KITCHEN. Directed by Boi Campbell and Gino Oddone, the film stars Victoria Gauthier and is supposedly set in the 1980's (check out that aerobics attire and those big earrings). While cooking up something in the kitchen, she hears a strange sound coming from the kitchen sink. Is the garbage disposal backed up, or is it something else? Something demonic? This very short film (a whopping two minutes!) was quick, fun, and cool, with a nice blood soaked homage to FLASHDANCE at the end!

After the screenings, Miss Misery called up both Devanny Pinn and Brandon Sleagle to receive their Miss Misery Coffin Statues and to screen trailers from films that they have collaborated on together: AREA 51 CONFIDENTIAL, VIViD, and SONG OF THE SHATTERED. Also receiving a coffin awards were Debra Lamb for work in independent horror films and the great John Stanley. Immediately thereafter, Miss Misery handed out the awards tonight's film winners: In third place was Reda's MY UNDEADLY, second place was PROFESSOR BROFMAN, and taking first place was, no surprise here, FAMILIAR! Miss Misery also handed out some very cool prizes for the audience, such as toys, graphic novels and passes to her horror convention coming this September. More on that in a little bit. After it was all over, everyone meet up in lobby were our winners and filmmakers posed for pictures for fans and photographers.

Overall the festival was a complete success! And I for one cannot wait for next year's fest! For those of you who wish to learn more about Miss Misery, visit her website at www.missmisery.net. To learn more about her company Last Door Productions, and all her future projects, please visit www.lastdoorwayproductions.com. Also as I previously touched on earlier,  Miss Misery will be hosting her Days Of Terror Sacramento Horror Convention at the Scottish Rite Center on September 28th and 29th. So make sure you mark these days on your calender! To learn more about the convention, visit their website at http://daysofterror.com.

Posted by Philip Castor at 9:31 PM