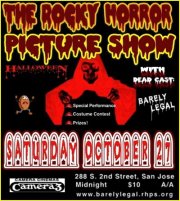 Welcome my cinematic thrill seekers to Day Twenty-Seven of my horror movie marathon! This past Saturday night I along my best friend Leslie, her daughter Oceanna, and three of her friends attended the special Halloween screening of THE ROCKY HORROR PICTURE SHOW at the Camera 3 Cinemas in scenic Downtown San Jose! Now usually these midnight rituals are always packed, filled with long time veterans and nubile virgins. But since it's Halloween season, there was a massive line of people, ready to do the Time Warp again! Once again my friends at Barely Legal Productions were there to bring this cult classic to life before our eyes!

I arrived at the Camera 3 around 11pm, and had some very yummy donuts to snack on, courtesy of our good friends at Psycho Donuts located in the theater lobby. About a half hour later Leslie and the gang showed up with their tickets. Now the show had been sold out for weeks, so we were all excited to attend the show! Oceanna also was kind enough to bring along three of her friends, who also just happened to be virgins! Awwww.....we love our virgins here at ROCKY!! I was able to get a hold of a member of the BL cast and branded her friends with the infamous "V" on their cheeks as well as other tasteful words like "Slut" and "Asshole." Yup, these kids had no clue what the night awaited them!

The tradition of our emcee Nate McHavoc (Riff Raff) calling up all the virgins from audience was taken to a whole new level with this show. Now in my Day Six review, I mentioned that when the virgins were called to the stage, half of the audience went up. Now this was a sold out crowd, and there was even more virgins in the audience. So when Nate called them up, over 75% of the audience came up on stage! It was unbelievable! I have never seen anything like that before! It was an amazing sight to see!

The Barely Legal cast turned in another fantastic performance once again, and the crowd had a blast! I along with my friends continued the party over at the local IHOP down on First Street. There's nothing like having a big plate of French Toast at 4am! This is what makes life worth living for! Also having breakfast were some of the members of Barely Legal. Yup, this IHOP is now the official post-ROCKY hangout spot! 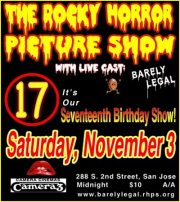 This was such fun-filled night! The cast, the crowd, the film, everything about the night was just perfect! I had the best time and so did my friends! Now if you wish join in on this midnight tradition of fun, you are in luck! Their next show is this coming Saturday, November 3 at midnight. And to make this show even more special, it is Barely Legal's 17th Birthday show! So make sure you come out and attend this momentous event! To learn more about future shows, and how you can become a cast member, visit their website at http://barelylegal.rhps.org/.

Thanks for reading, and enjoy the screaming!
Posted by Philip Castor at 7:48 PM