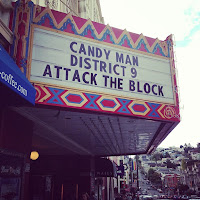 Welcome to Day Five of my Halloween Horrors Marathon and welcome to San Francisco! For those of you just tuning in, I will be watching and reviewing one horror film each day throughout the month of October. However there are exceptions to my schedule. This past Friday evening I traveled back out to the Castro Theatre in San Francisco for the Midnites for Maniacs triple feature! Tonight's theme was "F#ck Urban Sprawl" and I saw three amazing films that offered me action, excitement, and, of course, some chills and thrills. As always creator and host Jesse Hawthorne Ficks pulled out all the stops for tonight's show by screening original 35mm prints of the films as well as some very cool and vintage trailers!

Ficks came out and did his famous introductions and also thanks the audience for coming out to the show! The first film of the night was the 1992 horror film CANDYMAN. The movie's about a grad student named Helen Lyle (Virginia Madsen) who visits Chicago's Cabrini-Green housing complex to investigate the urban legend of the Candyman (Tony Todd). When Helen dismisses the myth, she is plagued by a series of murders orchestrated by the Candyman to make her believe in him, thus making him in the flesh once again.

Based on a story by Clive Barker and skillfully written and directed by Bernard Rose, the film was largely overlooked at the time of its release. The reason being was at this point in cinematic history, the horror film genre was offically dead. The slasher cycle which consisted on FRIDAY THE 13TH, A NIGHTMARE ON ELM STREET, and HALLOWEEN were over a done with. Psychological films such as MISERY and THE SILENCE OF THE LAMBS were winning Academy Awards. As a result, the film fell through the cracks, but it has gone to be hailed as one of the greatest horror films of the 1990's. Both Madsen and Todd give stellar performances and composer Philip Glass' score is so subtle and creepy that it's the definition of perfection. The film print came courtesy of Sony Pictures. The film was originally released by Tr-Star Pictures on October 16, 1992. Several classic movie trailers were screened before the film: 1988's PAPERHOUSE, 2009's DRAG ME TO HELL, and the original trailer to the 1973 film THE EXORCIST. And that original trailer scared the hell outta me!

The second film of the night was the amazing, sci-fi film DISTRICT 9. Produced by Peter Jackson and set in Johannesburg, South Africa, the film's about Wikus Van De Merwe (Sharlto Copley), a Multi-National United agent who is assigned to oversee the eviction of an alien population from their slum-like area called District 9, where these creatures nicknamed "Prawns" having been living in since the early 1980's. During the operation, he becomes exposed to a strange alien chemical and must rely on his two new "Prawn" friends to help him.

Written & Directed by Neill Blomkamp, the film was hailed as one of the greatest sci-fi films almost immediately upon its release. With its themes of of racism, xenophobia, and humanity, the film became known as a film with a conscience, a metaphor and a social comment on the human race and on society. The 35mm print came courtesy once again from Sony Pictures. The film was originally released by Tri-Star Pictures on August 14, 2009. The movie was preceded by trailers for upcoming M4M events: 1987's A NIGHTMARE OF ELM STREET 3: THE DREAM WARRIORS, 1991's TERMINATOR 2: JUDGEMENT DAY, and 2010's INCEPTION. Also, there was also a public service announcement from AMC Theaters, which I thought was hilarious! A lot of people in the audience laughed as well!

The third and final film of the night was last year's UK sci-fi import ATTACK THE BLOCK. Now I was fortunate to see the film when it first came out last year at the ArcLight Cinemas on Sunset Ave in Hollywood when I was down there for my vacation. Here is what I said about the film: In this very clever film, a nurse named Sam (Jodie Wittaker) is heading back home in a shady neighborhood in Lower London when she is attacked by a local teenage street gang, led by a boy named Moses (John Boyega). After robbing her, they encounter a strange beam of light that crashes down and out comes a monstrous-looking alien. Naturally, Moses defends his turf and kills the alien, which brings the rest of them to his block. Now he must protect his gang and his block (as well as Sam who he turns to for help) from the alien invasion as well as from drug lord Hi-Hatz (Jumayn Hunter). And the only safe place is in the weed vault at their friend Ron's (Nick Frost) apartment.

The film was a fast paced, sci-fi/action, urban city invasion mesh-up that Hollywood could take a few notes from. Now being a British film, you must get past the very thick accents and sometimes unpronounceable dialects. However, once you get past that slight hurdle, the film is a real treat and very entertaining. The film also touches on some social issues that are taking place in Britain. Urban violence, drug issues, violence against women, and government housing are just some examples that I noticed in the film. Issues that we here in America know all too well. This extremely rare 35mm print came courtesy of Sony Pictures. It was originally released StudioCanal on May 11, 2011. The film was preceded by several trailers: 1982's HALLOWEEN III: SEASON OF THE WITCH, 1986's THE TEXAS CHAINSAW MASSACRE 2, 1983's XTRO, and 1988's THEY LIVE.

Well folks there you have it! Another awesome Midnites for Maniacs show! Now being that it's October, there will be another M4M show next weekend at the Roxie Theater in San Francisco! The theme for that show is "Countdown to Hell" and the films being screened are A NIGHTMARE ON ELM STREET 3, THE TEXAS CHAINSAW MASSACRE 2, and HELLRAISER! So make sure you come on out to the city on Saturday, October 13th! To learn more about Midnites for Maniacs, visit their website at www.midnitesformaniacs.com. To view upcoming shows at the Castro Theatre, visit their website at www.castrotheatre.com.

Thanks for reading, and enjoy the screaming!
Posted by Philip Castor at 4:29 PM