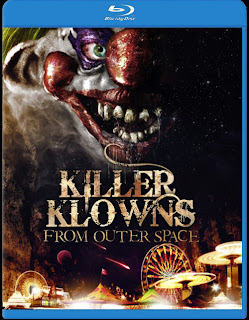 Only two days left people so let's jump in Day Thirty! Throughout the 100+ years of cinema history, clowns have not only made us laugh, they have terrified us. OK let's face it, clowns are scary. They're just so damn scary and creepy and unerving. So when I first saw KILLER KLOWNS FROM OUTER SPACE on VHS back in 1988, I didn't know whether to be scared or laugh! Up until then, I have never seen a movie quite like this before.

So wrap your head around this synopsis: A spaceship - looking like a circus tent - lands in a field near a small town, signaling the attack of deviant, red-nosed, balloon-twisting psychos from another world who plan to annihilate mankind - by turning people into cotton candy! Luckily, the town's teen citizenry decides to fight back and teach the cosmic bozos a lesson. But these klowns are no klutzes, turning popcorn, peanuts and caramel corn into playful - but deadly - weapons of madcap destruction and mayhem!

Sounds more fun than shoveling elephant shit, huh? Well it is a then some! The Chiodo brothers takes the idea of clowns being eerie and frightening, and fuses it with the common theme of aliens coming down from space; thus giving us aliens that look like clowns. For what it is, the film is actually quite inventive; and while much of the action is clichéd and/or samey, it's the little things that ensure it doesn't get boring.

This was the only film that the Chiodo brothers ever made but they have worked on many other projects in other roles, such as producing and visual effects. One of the locations they used for the film was the famous Santa Cruz Beach Boardwalk in Santa Cruz, California (which was were THE LOST BOYS was filmed at). The film was released to theaters on May 27, 1988. The filmed went on to earn a total of $43,625,095 worldwide. Not too bad of a return from an estimated $2,000,000 budget.

KILLER KLOWNS FROM OUTER SPACE is a true original cult classic that will now entertain a whole new generations of genre fans. So next time you and your date are bored and have no idea what to do, bust open a bottle of champagne, light some candles, pop this film in your player and watch the sparks fly! 4 1/2 out of 5 stars!! Highly recommended!!


KILLER KLOWNS FROM OUTER SPACE is currently available on Blu-Ray at your local retailer. You can also purchase a copy at the Amazon website at www.amazon.com.

Thanks for reading, and enjoy the screaming!
Posted by Philip Castor at 10:54 PM