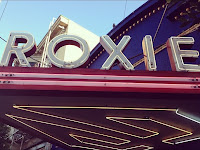 Welcome to Day Thirteen of my horror movie marathon! So once again I ventured back out to San Francisco to attend another installment of the Midnited for Maniacs show! This time host Jesse Hawthorne Ficks brought the show to the Roxie Theater, located in the Mission District. The theme of tonight's triple feature was "Countdown to Hell" and Ficks screened three of the greatest horror films of all time along with some classic horror trailers. As an added bonus, my good friend and fellow film blogger Jason Wiener (Jason Watches Movies) came out for the show! I also saw my good friend Beatriz Aguilar, who just also happens to be an awesome producer/director for the Fremont based film group called B.O.M. Productions (check out their excellent horror webseries called AMERICAN ZOMBIES on their Youtube channel)! So my fellow creatures of the night, let the horror begin!

The first film up was A NIGHTMARE ON ELM STREET 3: DREAM WARRIORS. The film reunites Freddy Kruger (Robert England) with his old rival Nancy Thompson (Heather Langenkamp), the only survivor from the first film and now a psychiatrist specializing in dream therapy. When she begins working at a psychiatric institution, she meets the last of the Elm Street kids, who are being terrorized in their sleep by Freddy Kruger. She soon discovers that one of the children Kristen (Patricia Arquette) has a special gift which may help them all destroy Freddy once and for all.

With this installment of the franchise, director Chuck Russell (THE MASK, ERASER, THE SCORPION KING) and Wes Craven (who wrote the screenplay) returned Freddy to his roots: a demonic creature who haunts and kills you in your sleep. This was also the film that introduced many one-liners that would propel Freddy into the stratosphere of popularity. Classic one liners like, "Welcome to Prime Time Bitch!" and "Oohhh what a rush." The film was originally released by New Line Cinema on February 27, 1987 and it grossed over $44.7 million, making it the highest grossing installment of the series. This "horrifying"  35mm film print came courtesy of Warner Brothers. Three Wes Craven trailers were screened before the movie: 2005's RED EYE, 1994's WES CRAVEN'S NEW NIGHTMARE, and 1985's A NIGHTMARE ON ELM STREET 2: FREDDY'S REVENGE as well as the trailer for this film.

Film number two for the night was THE TEXAS CHAINSAW MASSACRE PART 2! It's been a over a decade since the events of the first film and our "friends" are back causing terror once again. When Texas radio DJ Vantia Block (Caroline Williams) records a call-in that evolves two high school graduates being killed by what sounds like a chainsaw, she becomes victimized by the cannibal family, especially by Chop Top (Bill Moseley) and Leatherface (Bill Johnson). Her only hope comes in the form of former Texas Marshall Lieutenant 'Lefty' Enright (Dennis Hopper), who will stop at nothing to stop their trail of death.

Directed by Tobe Hooper and written by L. M. Kit Carson, the movie is a departure from the first film. This sequel was a black comedy slasher film, which caused many Chainsaw fans to cry fowl. The MPAA gave the film an X rating, which meant the film was released to theaters unrated! The film was banned in Australia for over 20 years! But what a lot of people missed was the social commentary of the film. This was a product of the 1980's, therefore, the Regan-era mentality of greed was predominate throughout the decade. That greed is commented in the film with Grandpa Sawyer (Ken Evert) talking about all the money he's making with his chili. The film was released by Canon Films on August 22 (my birthday!), 1986. Ficks screened several modern day sequel trailers before the film: 2003's JEEPERS CREEPERS 2, 2007's HOSTEL 2, 2007's THE HILLS HAVE EYES 2, 2003's FINAL DESTINATION 2, and 2005's THE DEVIL'S REJECTS.

The final film of the night is considered to be a classic among horror fans. HELLRAISER is one blood-soaked, gooey, gory, twisted film that could only come from the mind of Clive Barker! The film has it all: an unfaithful wife who is in love with her dead husband's brother, who's now a zombie thanks to the demons (angles to some) called the Cenobites. There's also a cool puzzle box and a lot of body parts being ripped off by chains with hooks on them! Yeah, it's that damn good!

The film's based upon the novel The Hellbound Heart by Barker, who also wrote the screenplay and directed the film. This is one of the best indie horror films to come out of the 1980's! Horror fans had never seen anything like this up until then, and it has spawned an unrepresented NINE sequels! The film was originally released here in the states by New World Pictures on September 18, 1987. Before the film, Ficks screened several Clive Barker trailers: 2008's MIDNIGHT MEAT TRAIN, 1995's LORD OF ILLUSIONS, and 1990's NIGHTBREED.

And folks that was my night of horror movie watching! Three great films with great friends in a great theater! The next Midnites for Maniacs show will be on November 2, 2012 at the historic Castro Theatre. The theme for that show is "Celebrate the End of Days" and it will consist of 1991's TERMINATOR 2: JUDGEMENT DAY, 2010's INCEPTION, and 1982's HALLOWEEN III: SEASON OF THE WITCH! So make sure you mark that date on your calender and come on out for some M4M fun! To learn more about Midnites for Maniacs, visit their website at www.midnitesformaniacs.com. To view upcoming shows at the Roxie Theater, visit their website at www.roxie.com.

Thanks for reading, and enjoy the screaming!
Posted by Philip Castor at 9:36 PM