Greetings and salutations everybody and welcome to that most wonderful time of the year! Yes, I am talking about Halloween! Around this time I get very excited and anxious, due to all the amazing horror themed events that not only take place at my favorite theaters, but every year I participate in a long time tradition that my younger brother Thomas and I started many, many years ago. Every October, I watch one horror movie every day until Halloween, which in itself is quite a challenge. But every year I rise up to the challenge, and so far this year has already started off on a very grand scale! 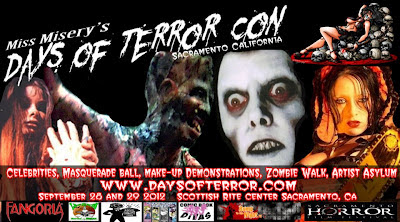 The guests read like a who's who in the horror genre. There were many FRIDAY THE 13TH alumnus on hand, such as Ari Lehman (the very first Jason from the original FRIDAY THE 13TH), Amy Steel (FRIDAY THE 13TH PART 2 and APRIL FOOL'S DAY), Dominick Brascia (from FRIDAY THE 13TH PART V) and Tom Fridley and C.J. Graham (from FRIDAY THE 13TH PART VI). Also on hand were other industry veterans like Suze Lanier-Bramlett (from the original THE HILLS HAVE EYES PARTS 1& 2), Scream Queen Legend Debra Lamb (THE INVISIBLE MANIAC, EVIL SPIRITS, DISCIPLES), Lynn Lowry (THE CRAZIES, SCORE, SUGAR COOKIES), Ken J. Hall (PUPPET MASTER, THE HALFWAY HOUSE), Max Wasa (MY STEPMOTHER IS AN ALIEN, SAVAGE BEACH, NO STRINGS 2: PLAYTIME IN HELL), Scott L. Schwartz (BUFFY THE VAMPIRE SLAYER, THE SCORPION KING) and Eileen Dietz (THE EXORCIST, HELTER SKELTER), just to name a few.

Now what was so great about this convention was that it not only paid tribute to horror's past, but it also recognized horror's future with a number of up and coming horror filmmakers, actors, actresses that are ready to leave their blood-soaked handprint on the genre. Guests included Michelle Shields (DARK WORLDS: SLASHER, FRANKENSTEIN: DAY OF THE BEAST), Devanny Pinn (AMERICAN GIRLS, THE BLACK DAHLIA HAUNTING), April Monique Burril (THE CHAINSAW SALLY SHOW, THE GOOD SISTERS), Jessica Cameron (CUT, HELL-O-WEEN, THE SLEEPER), director Dave Reda (BIT PARTS, MY UNDEADLY), reality star/actor Britt Griffith (GHOST HUNTERS, THE BLACK DAHLIA HAUNTING), Michelle Tomlinson (THE CELLAR DOOR, BRAIN DEAD), and director Brandon Slagle (VIViD, AREA 51 CONFIDENTIAL, BLACK DAHLIA HAUNTING).

There were some terrific vendor tables during the convention! Yours truly found a plethora of items to purchase (and I did purchase quite a bit) and some incredible T-shirts, DVDs, comics, toys, games, jewelery, and all kinds neat items and collectibles!

Other vendor's included the Sacramento Horror Film Festival (which I might be covering), Thegrindhouse.net, Fastcustomshirts.com, All Hallows Fantasy Faire, Nerd Kung Fu, and a few others. There were artists on hand such as DKWongart.com. Gary "Gaz" Gretsky, and M.e Walker with Malicious Intent Studios. I also had the privilege of meeting the amazing Samantha WPG, who specializes in body painting! Go to www.samanthawpg.com and check it out!

After the first night of the convention, there was an amazing after party with performances by San Francisco's own punk/metal band Dammit!, who really put on an excellent show! If you see these guys performing near you, go check them out! Also performing at the after party was Ari Lehman's own band First Jason. With Ari on the keychete (machete keyboard) along with his drummer, this two piece band had an incredible set with songs all about our favorite villain, Jason Voorhees. My ears were still ringing the next day!


As I mentioned earlier, there were several screenings of new independent horror films: THEY CAME FROM THE ATTIC, THE GOOD SISTERS (starring April Monique Burril), FRANKENSTEIN: DAY OF THE BEAST (starring Michelle Shields), WELCOME TO MY DARKSIDE: WOMEN IN HORROR DOCUMENTARY (directed by Reyna Young aka Miss Misery), BLOODY, BLOODY BIBLE CAMP, and THE BLACK DAHLIA HAUNTING. Since I was so busy covering the convention, I only had time to see one film. The film I chose to watch and review was director Brandon Slagle's THE BLACK DAHLIA HAUNTING. 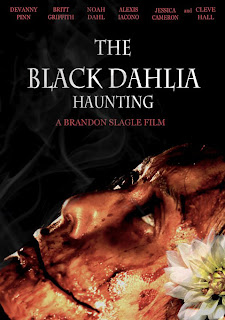 The film's about a young woman named Holly Jenson (Devanny Pinn) who's investigating the murder of her father by her blind younger brother Tyler (portrayed by Noah Dahl). During her investigation, she accidentally awakens the spirit of Elizabeth Short (Alexis Iacono), who is better known as the infamous Black Dahlia. Soon Tyler's physician Dr. Brian Owen (Britt Griffith) begins to suspect something different about Holly, which triggers a deadly secret from his past. Also making a cameo appearance in the film is actress Jessica Cameron portraying a young Norma Jean and Slagle himself as the disturbed Malcolm.

Unlike many of the Hollywood versions of the story, Slagle's take on the famous crime feels like a breath of fresh air. Giving it a supernatural spin, it still stays faithful to the facts about Elizabeth Short, while simultaneously making her and her death even more frightening. Pinn does a fabulous job portraying Holly, combining a hard ass attitude while giving her a sense of vulnerability. Reality star Griffith also deserves credit for his performance as Dr. Owen, who somehow makes us wonder who is exactly and whether or not he can be trusted. Now playing a blind person is enough of a challenge pulling it off and making it believable is even more challenging. So my hat goes off to Dahl's acting chops for making me forget that he was acting. Iacono's performance as Elizabeth Short is scandalous, mysterious, hideous, and demented that I couldn't believe what I was seeing. Now it's a know fact the Short didn't exactly hang in out with the right kind of people, but she did have some decent friends. Iacono's scene with Cameron's Norma Jean was very sweet and gave depth to Short's personality.

Shot in 10 days, Slagle's directing is stupendous, giving the ridiculous short time frame he had (he basically made the film on weekends!). There are some terrific shots and set ups that drive the film. One scene I recall that was very effective were the scenes shot in the cave with Holly "talking" to herself. This scene is a simple scene to shoot, but with Pinn's powerful acting combined with Slagle's directing style, it's one of the most effective and disturbing scenes in the film (there is an even more disturbing scene that unfortunately I cannot disclose. But let me say this: it's not for the faint of heart).

All in all THE BLACK DAHLIA HAUNTING is a great indie horror gem that all of you should definitely see! The film will be screened this weekend in Arizona for Rapture Horror Expo. And just recently, Pinn mentioned on Facebook that the film, "is not only been selected, but opening the entire Shockfest Film Festival in Hollywood!!" Sign up and follow the film's official Twitter account and check out the trailer on Youtube.com!

And that everybody is my official report on the convention! I cannot begin to describe just how much fun I had there! And judging by the reactions from the fans, guests, vendors, it looked like everyone had a good time there as well! And I am happy to report that a couple of days ago, Reyna announced on her Facebook page that, "After talking to some sponsors and press that were there it looks like I will be coming back to do another one in 2013. My crew and I are going to be getting ready to get together Days of Terror 2. This convention is going to grow and thank you to everyone who has supported me." So keep your eyes peeled here as I will be bringing you all the up-to-the-minute info on the progress of Days Of Terror 2! In the meantime, I would like to thank both Reyna Young and John Gillette for inviting me to cover the convention, my good friend a fellow press brother Oscar Benjamin, all the guests and fans who allowed me to take their pictures, and to everybody else I'm forgetting! It was the best weekend I had in a long time, and I cannot wait to do it again next year!

Make sure you check out Miss Misery's Movie Massacre show on Saturdays from 9pm-11pm throughout California on Channel KCTH 27 on AT&T U-Verse. Also visit her official website at http://missmisery.net.

Thanks for reading, and enjoy the screaming!
Posted by Philip Castor at 1:54 AM