My horror movie marathon continues with Day 17! So I headed back to Downtown San Jose to see another horror film. This time I went to the Camera 3 where I saw V/H/S, the new indie horror anthology. Now I first became aware of the film when I discovered the trailer for it on Youtube and it looked incredible! I was very excited to see this film! After yesterday's forgettable screening of SINISTER, I was so looking forward to this one. Now after I've watched it, I can honestly say that it is one of the worst horror films I have ever seen! 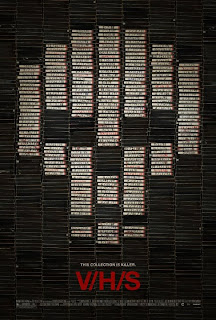 Here is the film's official synopsis: A POV, found footage horror film from the perspective of America's top genre filmmakers. A group of misfits are hired by an unknown third party to burglarize a desolate house in the countryside and acquire a rare tape. Upon searching the house, the guys are confronted with a dead body, a hub of old televisions and an endless supply of cryptic footage, each video stranger than the last.

So right off the bat, I would like to point out that the "found footage" idea has been done to death! With the release of 1999's THE BLAIR WITCH PROJECT, every wannabe filmmaker has ripped off the film's look and style. Soon there was a glut of horror movies that adapted the "found footage" style and look. So for all you upcoming filmmakers, let me give you some advise: DON'T MAKE A FOUND FOOTAGE FILM! IT'S ALREADY BEEN DONE! CREATE SOMETHING NEW AND DIFFERENT!! THANK YOU FOR READING THIS!! AND YOU'RE WELCOME!!

The main story arc of the film (TAPE 56) was directed by Adam Wingard with shorts helmed by a slew of directors: AMATEUR NIGHT was directed by David Bruckner, SECOND HONEYMOON by Ti West, TUESDAY THE 17TH by Glenn McQuaid, THE SICK THING THAT HAPPENED TO EMILY WHEN SHE WAS YOUNGER was directed by Joe Swanberg, and 10/31/98 was directed by a quartet known as Radio Silence. Out of all of these shorts, the only decent ones were AMATEUR NIGHT and 10/31/98. The rest were all forgettable. I was really disappointed with SECOND HONEYMOON because I am a huge Ti West fan! With his two other films (THE HOUSE OF THE DEVIL and THE INNKEEPERS), West has become of the most popular new filmmakers within the horror genre. However with his short, it went on way too long, and the payoff, which I did like, it wasn't worth the wait to get to it. Really a massive disappointment.

V/H/S gets my vote as one of the worst horror films of 2012! I really wanted to like this film, but it was just a complete waste of time and a complete pile of garbage! The only good part of the film was the trailer! 1 out of 5 stars! Avoid with a passion!


V/H/S is available On-Demand and is playing in select theaters nationwide. To see if it's playing in a town near you, visit the film's official website at www.magnetreleasing.com/vhs/.

Thanks for reading, and enjoy the screaming!
Posted by Philip Castor at 9:53 PM