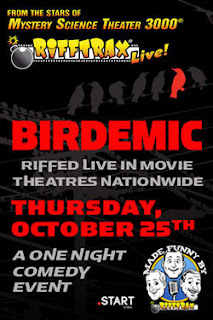 Hello again everybody and welcome to Day Twenty-Five! So this past Thursday night I attended the all new live RiffTrax broadcast of BIRDEMIC: SHOCK AND TERROR. Some of you may remember that I attended the MANOS: THE HANDS OF FATE live broadcast back in August. Now believe it or not, BIRDEMIC was way worse than MANOS!!

So if you don't know what a Rifftrax is, let me you all a quick definition. Rifftrax "are downloadable audio commentaries featuring comedians Michael J. Nelson, Kevin Murphy and Bill Corbett heckling (or riffing) films in the style of Mystery Science Theater 3000, a TV show in which Nelson was the head writer, and later the host. The RiffTrax are sold online and delivered by digital download," according to the website Wikipedia. But all this is just a fancy way of saying, "it's funny as hell!" Now Nelson, Murphy, and Corbett do the occasional live shows from one venue that is broadcast to hundreds of theaters all across the country, courtesy of teaming up with NCM Fathom Events. The closest theater that was participating in the live broadcast was the Century 20 Theaters in Oakridge Mall. So I headed over there to catch this awesome cinematic event!

Before the show, the RiffTrax broadcast had some hilarious jokes put up on the screen to get the audience primed and ready. Then at 8pm, the show began! Coming to us live from a theater in Nashville, Tennessee, the night started off with a side-splitting short entitled NORMAN CHECKS IN, which in a way was kind of a prequel to the short WELCOME BACK, NORMAN that I saw back in August. In the short, our favorite traveling salesman checks in to a hotel that, unfortunately, is bombarded with the annual taxidermy convention, which caused his room to be given to another guest. As a result of this, Norman is given the room from Hell. And of course we cannot forget his wonderful catchphrase, "Ughhhhhhhhhh!" It was hilarious!

Then it was time for Mike, Kevin, and Bill to riff our main feature. Now, I would like to right away apologize to all of you people out there who actually BIRDEMIC on purpose. I take this apology very seriously for this one simple reason: the film was made here in the South Bay, Yes, the film was shot all around here: San Jose, San Francisco, Half Moon Bay, Santa Cruz, all up and down Highway 1, Highway 17, and Highway 101. The movie was made by local filmmaker James Nguyen, who founded Moviehead.com, an online movie theater back in 1998. Then in 2001, he produced and directed  the romantic thriller JULIE AND JACK. Then in 2010 BIRDEMIC, was released, which was largely self-financed and produced through Nguyen's Moviehead Pictures company for a budget of less than $10,000. Production began ion 2006 and took about four years to produce. The film soon became known as one of the worst films ever made, which gave it notoriety and a massive cult following. It was picked for distribution by Severin Films and released on Blu-Ray and DVD.

To be honest, I don't know if I can review this film. I have never seen a film this bad before. And I love bad movies! I mean, for crying out loud, I worship these films! I have seen PLAN 9 FROM OUTER SPACE over a hundred times! I've seen THE ROOM! I've seen SPACE THING! Hell, I've even seen JERSEY GIRL!! And I've also seen the full length version of MANOS: THE HANDS OF FATE!! But this film...I don't know...what I saw....life doesn't make sense anymore.

Here is the film's official synopsis: A platoon of eagles and vultures attacks the residents of a small town. Many people die. It's not known what caused the flying menace to attack. Two young lovers Rod (Alan Bagh) and Nathalie (Whitney Moore) manage to fight back, but with the death totals rising high will they survive the Birdemic?

This film should be shown in all film school classes as to what NOT to make! The film is all around bad! Real bad!! The acting is slightly above a junior high play, the sound is damn awful and you can barely make out what the actors (I use that term very loosely), the directing was way below amateurish, the CGI special effects (again very loosely) was so bad it was ridiculous, the birds in the film were so fake looking it was sad, and it took over 45 minutes for the damn birds to attack! The first half of the film we are forced to watch computer salesman Rod court the very hot supermodel Nathalie. Alan Bagh will go down is cinematic history as one of the worst actors of all times! The man can't even act walking! Thank goodness for Whitney Moore! Out of all the so-called actors in the film, she was the most believable. She looks like a model, and when we see her in her super sexy lingerie, that was the most believable part of the film! As scary as this film sounds, James Nguyen is currently finishing up BIRDEMIC 2: THE RESURRECTION in 3D!!

Yes, the guys had one helluva time ripping this film a new one! Now I now that these guys are professionals and it's their job to make fun of these types of movies, but this one must have been one helluva doozy for them to make fun of. However the guys stepped up to the challenge, and I gotta say that this was their BEST RiffTrax show ever! Mike, Kevin, and Bill never let up once, never fumbled a joke, and they kept the audience in stitches all night! I have never laughed so hard before in my entire night!

Thanks for reading, and enjoy the screamig!
Posted by Philip Castor at 8:58 PM