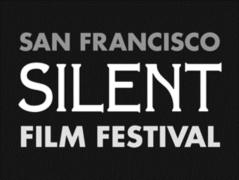 As long as there are silent movies, fans will always have a home to see them. And that home is at the historic Castro Theatre during the 17th Annual San Francisco Silent Film Festival. Founded by Melissa Chittick and Stephen Salmons in 1992, the festival has gained the reputation as THE film festival to attend, which is held every year in July. The festival has grown since its inception, now spanding four days of screening some of the greatest silent films ever made, rarely seen gems, and world premiers of once lost silent classics. The festival's mission is to "hand-selected the finest 35mm prints, engaged leading musicians to compose and perform live era-authentic musical scores, and invited filmmakers, authors, stars, archivists, and scholars to provide context and commentary for each film." And this year's line-up continues this mission, with sixteen screenings of silent treasures waiting to be rediscovered!

The festivities begin on July 12th with the opening night film: director William Wellman's 1927 classic WINGS, which was the very first film to win the Academy Award for Best Picture and stars Charles "Buddy" Rogers and Clara Bow. The amazing Mont Alto Motion Picture Orchestra will be providing the musical accompaniment with Foley sound effects performed by Ben Burtt, the man responsible for creating the sound effects for the STAR WARS films. Introducing this restored 35mm Paramount print is the director's son, William Wellman Jr. There will also be a gala party at the fabulous top-floor loft of the historic McRoskey Mattress Company after the screening!

Other highlights at this year's festival include Ernst Lubitsch's 1922 THE LOVES OF THE PHARAOH, with the great Dennis James on the Mighty Wurlitzer on Saturday July 13th. Also screening later that day is a rarely seen film by director Hanns Schwarz. THE WONDERFUL LIE OF NINA PETROVNA was chosen by famed local filmmaker Philip Kaufman as part of the Director's Pick series. The festival continues its tradition of screening silent cartoons for the kiddies with the beloved FELIX THE CAT cartoons on Saturday morning! The last film shown on Saturday is the festival's centerpiece, as well as perhaps one of the greatest silent films ever made: legendary director G.W. Pabst's 1929 masterpiece PANDORA'S BOX, starring the breathtaking Louise Brooks! On Sunday, fans can witness the spectacular feats of the amazing Douglas Fairbanks in his 1920 action packed film THE MARK OF ZORROR, with Stoneface himself, Buster Keaton closing the festival with his 1928 hilarious silent film THE CAMERAMAN, with the Mont Alto Motion Picture Orchestra providing the musical score. Plus as a special bonus, screening before the film will be Georges Méliès' A TRIP TO THE MOON with live narration by Paul McGann!

Also performing at this year's festival are Stephen Horne, Donald Sosin, Toychesta, Jim Washburn, Greg Smith, Matti Bye Ensemble, and the Alloy Orchestra. Along with Philip Kaufman, the festival will have many other celebrities, film historians, authors, critics, and archivists in attendance, such as Kevin Brownlow, David Shepard, and Leonard Maltin.

I have been attending this amazing festival for the past seven years now, and with each passing year the festival gets bigger and better! To see a silent film at the majestic Castro Theatre is simply a cinematic experience you cannot pass up. So mark these dates on your calender and come out and be part of the 17th Annual San Francisco Silent Film Festival, where, "True art transcends time."

The San Francisco Silent Film Festival will be held at the Castro Theatre from July 12th-July 15th. To view the festival's film schedule, purchase tickets and passes, location of hotels to stay at during the festival, please visit their official website at www.silentfilm.org. I hope to see you all there!

Thanks for reading, and enjoy the show!
Posted by Philip Castor at 7:18 PM