Hello again my faithful readers! There is nothing better in life than sleeping in late on a Saturday morning.  But what's even better than that is seeing a movie over at the Camera 7 in the Pruneyard Campbell! So after sleeping in late from my Midnites for Maniacs the previous night, I bolted for Camera 7 to see director John Madden's latest film THE BEST EXOTIC MARIGOLD HOTEL. 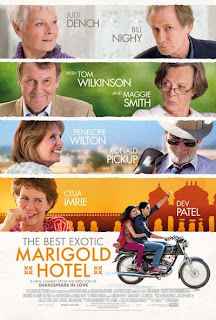 The film's about a group of British seniors who become enticed with an advertisement that suggests that they should spend their last days living in an inexpensive and restored Marigold hotel in India: widowed housewife Evelyn (Judi Dench), former high court judge Graham (Tom Wilkinson), married couple Jean (Penelope Wilton) and Doug (Bill Nighy), retired housekeeper Muriel (Maggie Smith), wealthy husband hunter Madge (Celia Imrie), and aging player Norman (Ronald Pickup). However, once the guest arrive, they discover that the hotel is not as restored as they thought it was, but manager Sonny (Dev Patel) has high expectations for his hotel. Once settled in, they soon explore their new surroundings, and are forever transformed by their experiences of living in their new home. Soon, they all realize that all their lives were just beginning.

Madden came to world wide acclaim with films like SHAKESPEARE IN LOVE, PROOF, and THE DEBT. With this film, he treats the issue senior citizens in their twilight years as real people; they have real feelings. Some are scared when they arrive to their new home, but being in India gives them the idea of living life to its fullest. He treats the issue with respect and poses the idea that life isn't over when you grow old.

The entire cast was fabulous in the film. But then again, with an ensemble cast like this, how could you go wrong? Now I could go into detail about these fine actors and actresses, but it would take way too long to tell you all just how fantastic they all are! So let me tell you this: Amazing actors, amazing actresses, amazing location, and amazing director makes this an amazing film!

THE BEST EXOTIC MARIGOLD HOTEL is a marvelous film that transcends age, race, upbringing, and background. It reminds us that growing old doesn't mean it's the end of your life, rather it's just the beginning. 4 out of 5 stars!


THE BEST EXOTIC MARIGOLD HOTEL is currently playing in theaters nationwide, including at the Camera Cinemas here in the Bay Area. To view showtimes, visit their website at http://www.cameracinemas.com.

Thanks for reading, and enjoy the show!
Posted by Philip Castor at 11:14 PM