After spending last weekend at the 17th Annual San Francisco Silent Film Festival, I had to get use to the idea of seeing a "talking" film again. So this weekend I went to get caught up with what's new in movie theaters. The first film I saw over at the Camera 7 in the Pruneyard Campbell was director Wes Anderson's latest film MOONRISE KINGDOM. 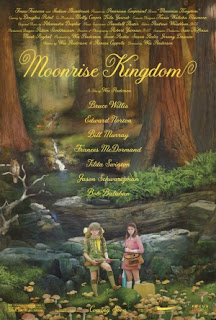 The film lovingly tells the tale of first love, in a humorous and whimsical way one would expect from Anderson. Set in 1965 on the fictional New England island called New Penzance, the film's about two 12 year-olds who fall in love and run away together: "Khaki Scout" orphan and misfit Sam Shakusky (Jared Gilman) and the disenchanted Suzy Bishop (Kara Gilman). When their disappearance is discovered, the grown-ups begin the search for them. There's "Khaki Scout" Master Ward (Edward Norton) and Suzy's attorney parents Walt and Laura Bishop (Bill Murray and Frances McDormand), who team up with the local police Captain Sharp (Bruce Willis) to find the runaway lovers. But will young love be triumphant or will adult authoritism crush their dreams of utopia? Narrating the film is the fantastic Bob Balaban.

It's been five years since Anderson's last film; the live action film 2007's THE DARJEELING LIMITED (the 2009 film FANTASTIC MR. FOX was an animated film), and it looks like our director friend has lost none of his quirky imagination. His film's do not take place in the real world, but in a fantastic and unique alternate universe, where the bizarre and the eclectic, the witty and the eccentric all co-exist in a world that one wishes it could inhabit. By placing the tale of young love in this universe, the film has its own enchanted magic that will leave the audience under its spell. It also helps to have a great story and dialogue (Anderson co-wrote the script with Roman Coppola), beautiful cinematography Robert Yeoman, and creative production designer Adam Stockhausen to bring this fabled storybook to life.

Anderson's cast of regulars, including Murray, McDormand, are joined by newbies Norton and Willis, and all of them really bring their A game to the project. All give stellar performances, however youngsters Gilman and Gilman nailed their parts perfectly and really knocked it outta the park with their portrayal of Sam and Suzy respectively! If you can't feel anything for these kids and their love for one another, then my friend, you are dead inside!

MOONRISE KINGDOM is Wes Anderson's funniest picture so far and his most romantic. The film really commands you to recall your first young love, and by doing that, we can connect with the film. This film is one of my favorite films of 2012 thus far! 5 out of 5 stars! Highly recommended!!


MOONRISE KINGDOM is currently playing at select theaters nationwide, including the Camera Cinemas here in the Bay Area. To view showtimes, visit their website at www.cameracinemas.com

Thanks for reading, and enjoy the show!
Posted by Philip Castor at 11:26 PM