Happy Fourth of July everybody! Hope you all had a fun-filled day off! I decided to use this holiday to go check out some new movies.  So off I went to the Camera 7 in the Pruneyard Campbell where I saw Seth MacFarlane's directorial debut film TED. 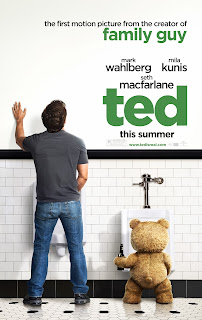 In Boston of 1985, a young and lonely child named Jack Bennett makes a wish that his large teddy bear that he got for Christmas was real. When he wakes up the next morning, his bear comes to life, and they become the best of friends! Fast forward to 2012 and Jack (Mark Wahlberg) is now 35 years old, works at a crappy job, smokes a lot of pot, and watches the film FLASH GORDON with his childhood friend Ted (voiced by Seth MacFarlane). The only thing good in his life is his loving, caring, and incredibly hot girlfriend Lori Collins (Mila Kunis), his girlfriend of four years. But when Lori gets tired of Ted's shenanigans (smoking pot, drinking, and having prostitutes over the house), she tells Jack that she wants more from their relationship, which puts a strain on his friendship with Ted. Narrating the film is none other than Patrick Stewart.

This is the type of film that you would expect from the MacFarlane, the creator of the animated hits FAMILY GUY, AMERICAN DAD, and THE CLEVELAND SHOW. The film is politically incorrect, offensive, vulgar, filled with juvenile toilet humor, profanity, and sexual situations that some might find repulsive. So of course I laughed the whole way through the damn movie! I mean c'mon! It's a giant walking teddy bear that swears, drinks, and likes prostitutes! Plus making his return to the big screen is none other than Flash Gordon himself Sam J. Jones! What's not to like about that? Plus look for the sexy Norah Jones and Tom Skerritt making cameos in the film.

Now believe it or not, underneath all of this immature humor, MacFarlane crafted a really solid script that contains good character development, a nice three arc story, and an emotional ending that tugs on your heart strings. Both Wahlberg and Kunis have great on-screen chemistry, but Wahlberg's acting is fantastic since he had to pretend that there was a talking teddy bear with him all the time. The big fight scene between his character and Teddy will go down in the record books as the best fight scene with a teddy bear! Even though he's not physically not there up on the screen, MacFarlane was hilarious, and with Wahlberg, this could be the best comedy duo since Abbott and Costello!

MacFarlane's directing is sharp, fluid, and moves at an even pace. Production values looked great, which proves that this guy has talent. But then again, I already knew that. I remember seeing his first cartoons on Cartoon Network's old Cartoon Cartoon variety show! He recently released an album of American standards called Music Is Better Than Words.

TED is this year's laugh-out-loud comedy hit, and one that will part of drinking games at colleges for generations to come! So if you want to offend that relative that really just bugs the hell out of you or if you have a friend that really needs to lighten up, take them to see this film! You'll make a lot of enemies with this! Five out of five stars!!


TED is currently playing in theaters nationwide, including at the Camera Cinemas here in the Bay Area. To view showtimes, visit their website at http://www.cameracinemas.com.

Thanks for reading, and enjoy the show!
Posted by Philip Castor at 3:06 PM