Phil sees YOUR SISTER'S SISTER at the Camera 7 Pruneyard Campbell-July 4, 2012

The second film I saw on the Fourth of July at the Camera 7 was the new IFC Films comedy/drama YOUR SISTER'S SISTER. The film starred Emily Blunt, Rosemarie DeWitt and Mark Duplass and it was written and directed by Lynn Shelton. 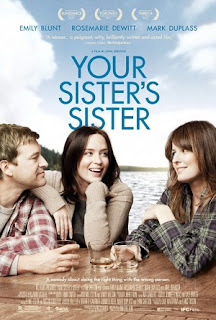 It's been a year since Jack's (Duplass) brother passed away. To help him get over his loss and to find himself again, his best friend Iris (Blunt) sends him off to her father's cabin in the woods Upon his arrival at the cabin he meets Hannah (DeWitt), Iris' vegan, lesbian half-sister, who just broke up with her girlfriend of seven years and was looking for some time alone. The two share their problems over a bottle of tequila, and before you know it, the two wind up sleeping with one another. But when Iris shows up the next morning, both Jack and Hannah try to hide this secret from her, fearing it would ruin their friendship. However Iris is hiding a secret of her own as well.

The film is a character driven film that really exams a wide array of human emotions; from grief and loss to love and rebirth. Blunt is wonderful in the film; sweet, kind, vulnerable when she bears her heart to her sister Hannah, which by the way, DeWitt nails her character perfectly. Duplass' Jack is somewhat of a whiny individual, and I didn't really like him at the start of the film, which we're supposed to do. As the movie progresses, so does Jack, as he becomes the adult that he's supposed to be. All three actors play off splendidly with one another, which gave the film that sense of realism, like we know these people as if they were our friends.

Shelton crafted a fine script and looks like she gave her actors some space for improvisation, which gives the film that indie charm that I love so very much. It was a well paced film, shot with mostly hand held cameras, while some with a steady camera, like the shots of the beautiful cabin surrounded by the woods an the nearby lake. Within this tranquil scenery, there is this house that's filled with raw emotions that engulfs our characters to the point of self destruction.

YOUR SISTER'S SISTER is a wonderful, emotionally thoughtful film that demands your attention. With Hollywood beating us over with their summer blockbusters, here is a small and engaging indie film that really gives you what you need: a solid story, great acting, and superb directing. Four out of five stars!


YOUR SISTER'S SISTER is currently playing in theaters nationwide, including at the Camera Cinemas here in the Bay Area. To view showtimes, visit their website at http://www.cameracinemas.com.

Thanks for reading, and enjoy the show!
Posted by Philip Castor at 10:01 PM