The name Woody Allen brigs to mind, at least mine, some of the most beloved and admired films of the last 40 years: ANNIE HALL, BANANAS, SLEEPER, HANNAH AND HER SISTERS, and RADIO DAYS are some of this reviewer's personal favorites from when I was younger. In the new millennium, after hitting some would say a "creative slump," he left New York for London, where he directed 2005's massive comeback hit MATCH POINT. Then he hit his peak again with last year's critically acclaimed film MIDNIGHT IN PARIS. Now Allen unveils his newest film TO ROME WITH LOVE. 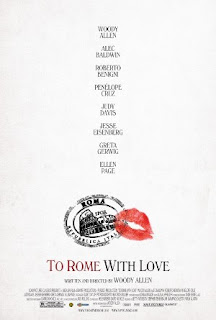 Featuring an ensemble cast that includes Alec Baldwin, Roberto Benigni, Penelope Cruz, Fabio Armiliato, Judy Davis, Antonio Albanese, Jesse Eisenberg, Greta Gerwig, Ellen Page, Alison Pill and Woody Allen (making his return to acting since his 2006 film SCOOP), this romantic comedy follows a number of people in Italy whose stories are told in four vignettes and the romances, adventures, and predicaments they all get into.

Writer/director Allen has been on a rollercoaster ride of a comeback recently. Since the 2005 release of MATCH POINT, Allen has been working nonstop. He has made seven films since 2005, one per year. With this film, I feel that Allen has made yet another great romantic comedy. What has made Allen hit his second wind? What has been his muse for the past seven years?

The answer to that question, in my humble opinion, is scenery. For most of his career, New York was the backdrop for a majority of his films. From MANHATTAN to HANNA AND HER SISTERS to RADIO DAYS, New York was his inspiration. But you can only tell so many stories about good 'ol NY that eventually, the stories begin to sound the same. Enter London in the year 2005. With the release of MATCH POINT, both critics and fans were surprised and welcomed back their friend. Also having the breathtaking Scarlett Johansson in the film didn't hurt either. Soon Allen was back and making critically acclaimed films at an astounding rate. With last year's international hit MIDNIGHT IN PARIS, Allen hit his creative peak. As one would imagine, it would be very difficult to follow up that film. But in my opinion, he crafted yet another stellar hit with this picture.

Rome is indescribably beautiful in the film, and Allen makes sure we see it all with 360 degree pans, high altitude camera angles, and adding to its beauty is the hilarious stories that Allan's characters find themselves in.

TO ROME WITH LOVE is an instant classic, filled with love and laughter set against one of the most majestic cities in the world! While not quite up to PARIS, Allen has crafted yet another romantic comedy winner! Defiantly take a date to this movie! 4 1/2 out of 5 stars!! Recommended!!


TO ROME WITH LOVE is now playing in theaters nationwide, including at the Camera Cinemas here in Bay Area. To view showtimes, visit their website at http://www.cameracinemas.com/index.shtml

Thanks for reading, and enjoy the show!
Posted by Philip Castor at 11:47 PM