Hello everyone and welcome back to my up-to-the-minute blogging on the 15th Annual Broncho Billy Silent Film Festival, hosted by the Niles Essanay Silent Film Museum! Now for this evening's program, the museum was screening a silent comedy classic that starred two of the biggest stars at that time: Clara Bow and the adorable Baby Peggy! The night started off with the the Lopez Family receiving the Ray Hubbard award. The family own the building that the museum is in and we are very thankful that they letting us do what we do here and to call this our home! On the piano for tonight's program was David Drazin.

The first short was TWIN PEAKS TUNNEL. This 35mm film documented the of the tunnel from Market to West Portal in San Francisco. The opening of the film shows construnction beginning on the corner of Castro and Market Street. Now as you all know that I frequent the Castro to attend many film screenings and to see what it looked like back on Decemeber 5, 1914 was amazing! Also worth noting was that in 2011, the museum discovered this short and it became the museum's latest restoration, with help from the National Film Preservation Foundation. The film, however, is still incomplete. The last scene, where there is a big gala opening celebration, is still missing. So if anyone out there knows the location of this scene, please contact Davis Kiehn at the museum's website!

The second short film of the night was THE SHOTGUN RANCHMAN. Again another 35mm print from the BFI, the film was made here in Niles and is about a rancher named Jake Nixon (Arthur Mackley). He's not the nicest man to know, and when a widow (Julia Mackley) and her child (Audrey Hanna) come to his ranch looking for help, old Jake sends them away. But his helper (True Boardman) hides them on the ranch without Jake's knowing. However Jake finds out, but when the little girl becomes severely ill, will Jake have a change of heart? The film was released to theater on October 21, 1912.

The last short film screened was THE PROSPECTOR. Another beautiful 35mm print from the Library of Congress, the film was written and directed by Arthur Mackley and was filmed here in Niles. The film also starred Mackley, Fred Church, Evelyn Selbie, and Audrey Hanna. The film was released by Essanay on December 12, 1912. 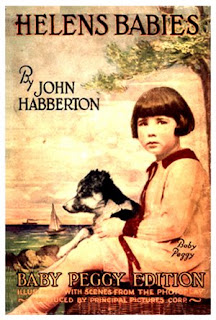 HELEN'S BABIES (1924): Starring Clara Bow, Baby Peggy, and Edward Everett Horton. Based on the 1876 children's novel of the same name by John Habberton, the film's about Harry Burton (Horton), a successful author on how to raise children, even though he is bachelor who plans on never having children. He visits his sister and her husband, who in return leave for a quick vacation and leaves him in charge of their two daughters: eldest Budge (Jean Carpenter) and Toddie (Baby Peggy). Harry soon finds out just how hard rearing children is, but coming to his aid is the beautiful next door neighbor Alice Mayton (Bow). The film was directed by William A. Seiter, who directed over 130 films with stars like Shirley Temple, W.C. Fields, The Marx Brothers, Stan Laurel and Oliver Hardy and Bud Abbott and Lou Costello. The film itself was sweet, heart warming, and extremely hilarious. Before the film's screening, Baby Peggy herself Diana Serra Cary came up before the audience and discussed the making of the film and some of her fondest memories about her co-stars! The film was released by Sol Lesser Productions on October 12, 1924.

Another day done, and one more left to go! It's still not too late to purchase tickets for Sunday's programs. To view the festival's film schedule, visit the museum's website at http://www.nilesfilmmuseum.org./

Thanks for reading, and enjoy the show!
Posted by Philip Castor at 9:50 AM