Hello again everybody and welcome back to the third and final day of the 15th Annual Broncho Billy Silent Film Festival at the Edison Theater here in the Niles District of Fremont. Well, here we are folks. The last program of the festival. Hard to believe it's all coming to an end. But before we say goodbye, I have one more program to review! Introducing the film was Bob Birchard, the founder of the Cinecon Classic Film Festival and on the piano for this evening was the great Bruce Loeb. 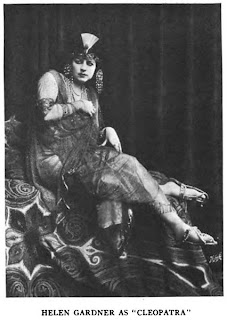 The last film of the festival was CLEOPATRA, the 1912 version. Actress Helen Gardner portrays Cleopatra, who discovers a slave named Pharon (Mr. Howard) is madly in love with her. So she strikes up a deal with him: she will give him ten days of "love," then he has to commit suicide. He agrees, however Cleopatra's handmaiden Iras (Pearl Sindelar) is in love with him and doesn't want to see him die. Later on she meets the striking Marc Antony (Charles Sindelar) and falls for him. She finds herself allying with Antony against General Octavius (Mr. Paul), joins in a brief war, then she dies (by suicide by a poisonous snake bite) so she may join her love Antony in the afterworld, and be free from the rule of the Romans.

In 1912, Gardner became the first film-actor, male or female, to form her own production company: Helen Gardner Productions. The film was directed by her husband Charles L. Gaskill. Their production of CLEOPATRA (their first production for the company) was the first film adaptation of the famed Queen and was one of the first American full-length films. Also it was made five years before the Theda Bara version. Gardner produced eleven feature films before closing her studio in 1914. The film was originally released on November 13, 1912.

After the film ended, David Kiehn came up and talked about the special project that the museum is currently working on: a brand new silent film! Entitled THE CANYON, Kiehn, along with camera historian Sprague Anderson, will be using the same techniques AND equipment as Broncho Billy Anderson did back when he first came to Niles back in 1912! There is a fundraiser for this very special project. To make a contribute, please visit www.indiegogo.com/nilesfilm.

Well folks, there you have it! Another great festival and another great time at the museum. Remember that the museum has weekly Saturday shows, and they will also be showing Laurel and Hardy talkies on Sunday afternoons. To learn more about the Niles Essanay Silent Film Museum, how to become a member, and view their film schedule, visit their website at www.nilesfilmmuseum.org.

Thanks for reading, and enjoy the show!
Posted by Philip Castor at 1:30 AM