Phil sees THE POSSESSION at the Camera 12 Downtown San Jose-September 8, 2012

So there are a couple of really interesting horror films coming out in the next several months. Of course, this makes me extremely happy, seeing that I am a horror film fanatic! Based on a true story and produced by acclaimed director Sam Raimi's Ghost House Pictures, THE POSSESSION tells the harrowing story of demon possession with a Jewish slant. 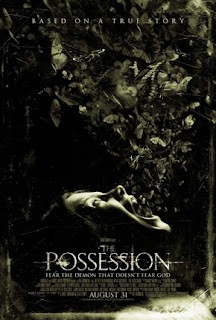 The film's about a young girl named Em (Natasha Callis), who while at a yard sale with her father Clyde (Jeffrey Dean Morgan) and her older sister Hannah (Madison Davenport), finds and buys an antique looking box. However, she is unaware that an evil spirit resides in the box, and is seeking a host to inhabit. As Em slowly becomes possessed, Clyde along with his ex-wife Stephanie (Kyra Sedgwick) receive help from a young Jew named Tzadok (Matisyahu), who attempts to perform a Jewish exorcism to save their daughter's soul.

Believe it or not, the film is based on the Los Angeles Times writer Leslie Gornstein's article "Jinx in a Box", about an antique wooden box purchased on eBay which reportedly had been brought to America by a Holocaust survivor after World War II, and which contained evil spirits that brought devastating effects to a series of buyers. The seller's name was Iosif Neitzke, a Missouri student at Truman State University in Kirksville Missouri. After detailing on his blog about how his hair was falling out at the age of 20 and the lights burning out in his house, Iosif sold the box to Jason Haxton, Director of the Museum of Osteopathic Medicine in Kirksville, Missouri. Eventually, Jason began to suffer from a series of mysterious misfortunes: vomiting blood, developing hives and other health issues. Soon after he met with several Rabbis in an attempt to seal the Dibbuk spirit in the box once again. It worked and he hid the box in a secret location, a location he will not reveal.

While the true story surrounding the Dibbuk Box is extraordinary, the film itself does capture some of the story; mainly the box is a source of evil that plagues poor Em, almost consuming her with its spirit. She begins to transform into a shell of her former self, and there are some excellent chills detailing this transformation. But while the Dibbuk Box is the main focus of the film, it's the parent's divorce as the subplot that really hits home. We see Clyde and Stephanie constantly at each other, blaming one another's faults while their daughters are caught in the middle, completely devastated. Divorce is a serious issue and a painful one at that, and to a child, that is ultimate horror to experience!

Both Morgan and Sedgwick play their parts amicably, but the standouts in the film are the two young actress. Madison Davenport does a great job of portraying the older, somewhat cynical Hannah while Natasha Callis gives Em personality, albeit sad, lonely, wishing her life was perfect again. But when Em becomes possessed, Callis goes all out and really does an outstanding job! Not since Linda Blair's performance of Regan from THE EXORCIST have I seen such devotion and dedication to a role! Callis' protrayal of Em will no doubt leave you with nightmares!

THE POSSESSION offers more chills than scares, but it's a solid film from beginning to end! Some will say that it's a Jewish version of THE EXORCIST, and to be honest, that's an unfair comparison. It offers us a chance to see what other religious folklores are out there, and to experience what they believe in as well as what they fear. Fans of the horror genre should see this film and be satisfied with the end results. 4 out of 5 star! Recommended!


THE POSSESSION is currently playing in theaters nationwide, including the Camera Cinemas here in the Bay Area. To view showtimes, visit their website at www.cameracinemas.com.

Thanks for reading, and enjoy the show!
Posted by Philip Castor at 4:31 PM