Welcome to Day Sixteen of my horror movie marathon. What I love about October is all the horror films that are coming out to theaters. One of these is the new film from Summit Entertainment entitled SINISTER. From the looks of the film's commercials, I thought this was going be a very cool horror film. However, while watching the movie, I thought I was going to die from boredom. 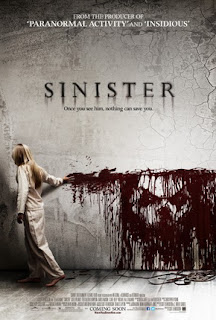 True-crime writer Ellison (Ethan Hawke) is looking to publish a bestseller more than ten years after the release of his hit book, "Kentucky Blood." He who moves into a new home with his wife, Tracy (Juliet Rylance) and his two children, Ashley (Clare Foley) and Trevor (Michael Hall D'Addario) near the site of a local crime in order to get inspiration for his novel. However, their house was the scene of a grisly crime, leaving a mother, father, and two children dead, and a third child missing. Upon moving in, Ellison finds a box of super 8 films in the attic, showing the murders of the family who previously lived in his house and four other murders dating back to 1966. The only connection between the murders is a symbol found in all the films. With his marriage deteriorating and his children's behavior becoming increasingly strange, Ellison is determined to connect the dots and possibly even solve the string of gruesome murders.

Directed and scripted by Scott Derrickson (THE EXORCISM OF EMILY ROSE and the 2008 remake of THE DAY THE EARTH STOOD STILL) from a C. Robert Cargill story, the film does contain some good scares, but to me, the film fell flat. I thought the scares were all predicable; I saw each and every single scare before it happened. So throughout the entire film, I just sat there commenting to myself, "This is going to happen" and "That is gonna happen." And I felt that the film dragged on and on but it wasn't that long of a film. It's a little over a hour and a half, but it felt like it was a two hour film. Sad to say, this wasn't a very good horror movie. But I did like the idea of the film! I thought it was a very original horror film idea, but the execution wasn't up to par with it. All the good parts of the film was used in the trailer. And I don't really know what else to say. So this might be the shortest review I've ever done! How about that? I'm at a loss for words, so this is a new experience for me!

SINISTER is one helluva boring horror film. It wasn't scary, it wasn't terrifying, it wasn't anything! Best to skip it and just watch one of the old school horror classics. 1 out of 5 stars! Avoid with a passion!


SINISTER is currently playing in theaters nationwide, including at the Camera Cinemas here in the Bay Area. To view showtimes, visit their website at www.cameracinemas.com.

Thanks for reading, and enjoy the screaming!
Posted by Philip Castor at 8:13 PM